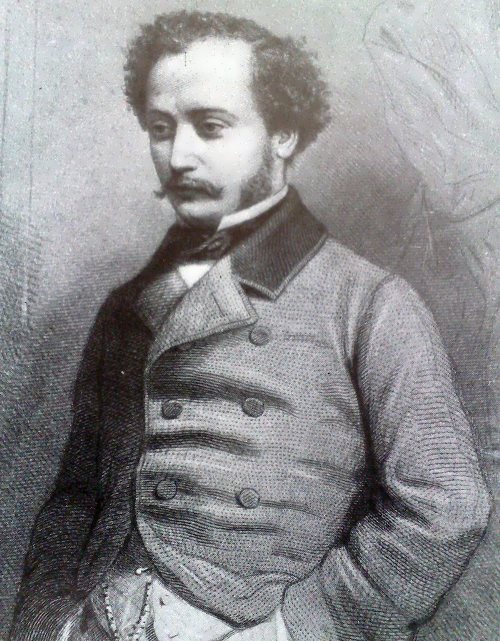 Alexandre Dumas Son (Fr. Alexandre Dumas fils) was a French playwright and writer, member of the French Academy (since 1875), the son of Alexandre Dumas.
Alexandre Dumas Son was born on July 27, 1824 in Paris. His mother, Marie-Laure-Catherine Labay, was a simple Parisian seamstress. Dumas Sr. left the boy’s mother. He didn’t want to marry her and recognize her child. On March 17, 1831 his father officially legitimized his son and gave him a good education.
At the age of 18 Dumas began to write poems in periodicals. In 1847 he published his first book of poems, «Péchés de jeunesse» (The sins of youth) which was followed by a series of small novels and short stories, which partly reflected the influence of his father ( Aventures de quatre femmes et d’un perroquet ( The Adventures of four women and a parrot), Le Docteur Servans (Dr. Servan), Cesarine, Le Roman d’une femme, Trois hommes forts etc. Later he published more original novels and stories: Diane de Lys, Un paquet de lettres, La dame aux perles, Un cas de rupture and others.

Dumas Father preferred to write on historical subjects, son wrote about the life of contemporary society. “I find my stories in dreams – said Dumas – and my son found them in reality. I work with my eyes closed – he keeps them open. I draw – he photographs. ”
Alexandre Dumas Son died on November 27, 1895 in Marly-le-Roi. 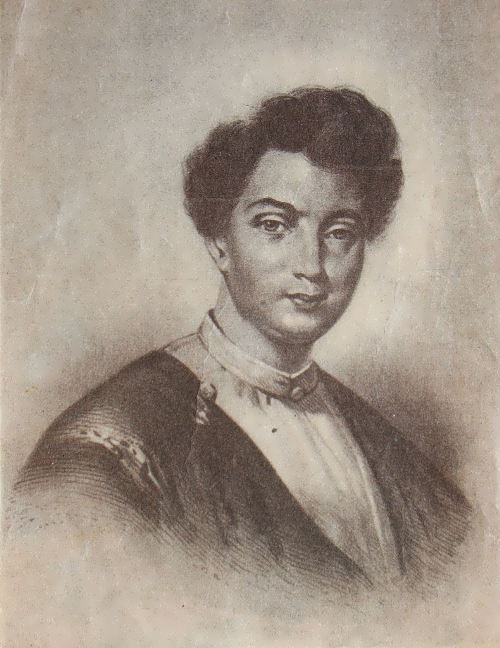 Alexandre Dumas in 1842 by Eugene Giraud

Interesting facts
– Dumas once said: “My father is a large baby that I got when I was very young.”
– Famous Parisian courtesan Marie Duplessis became the prototype of Marguerite Gautier, the heroine of the novel The Lady of the Camellias. In 1844 – 1845 young Alexandre had a love affair with her.
– Alexandre Dumas fils, who condemned adultery in his plays, was a lover of married women himself. One of his lovers was a Russian countess Lydia Nesselrode, nee Zakrevskaya. She became the prototype of the heroine of the novel The Lady with Pearls. In 1853 Dumas fell in love with her friend Nadezhda Naryshkina. In 1860 they had a daughter, Maria Alexandrina Henriette. When Naryshkina widowed in 1864, Dumas married her and adopted their daughter. In 1867, their daughter Jeannine was born.
In 1887, Dumas began a passionate affair with a young Henriette Escala.

Marie Duplessis and Alexandre Dumas fils
The adventurer and dreamer Dumas almost didn’t take care of his son, who from an early age did not like his careless parent. In his novels images from childhood and adolescence come to life: an abandoned woman, divorce, infidelity and the poor. He was always trying to see something good in confused people in life, he even was often called “the lawyer of prostitutes and abandoned women.” 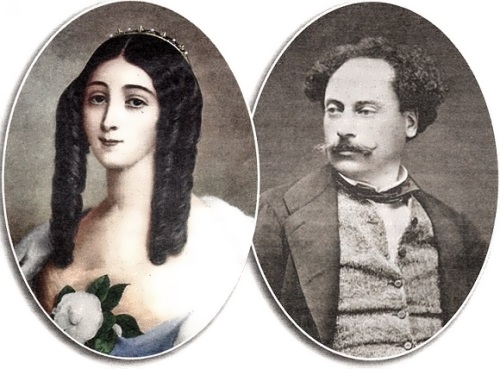 The most famous and at the same time controversial work of Alexandre Dumas fils was the novel The Lady of the Camellias, which is based on a real relationship of the writer and well-known French courtesan.
He met Marie Duplessis (real name Alphonsine Plessis) in 1844, when he was twenty years old. He was not known to anyone, and too poor. She was the same age as he, but already an experienced lover.
Marie was a tall brunette with a perfect body. She was elegant, graceful, knew how to behave in society and her lovers had no idea of her true origin.
Duplessis and Dumas met in a Paris café. They walked around the city, and then went to her luxurious apartment. Later Marie told him about her life, and the young man, with tears in his eyes was listening to the story of his charming friend, fell in love with her.
Marie was a peasant from Normandy. Her father sold the girl to the local lord. He was noble, rich, but too old. However, a few months later he became bored and kicked her out.
Poor Marie had to go from house to house where she worked as a maid, a cook and a laundress. It wasn’t a secret that men visited her nearly every night for a small fee. And once the pretty girl was noticed by a rich man in a restaurant where she moonlighted as a waitress. He spent a night with her and the next morning offered to move to a small apartment in the center of Paris. He recommended the charming Marie to his rich friends who paid very generously. So a young provincial from Normandy became one of the most famous and expensive courtesans in Paris.
Dumas and Duplessis’ novel lasted for a year until she asked her secret friend not to bother her any longer. 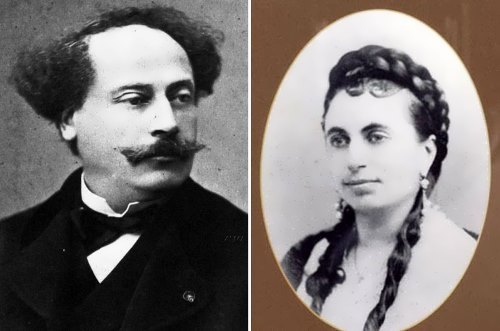 Dumas fils and his daughter

Alexandre was depressed after the break up with his beloved. And Marie suddenly fell ill with tuberculosis. She was left alone. She was selling all her possessions to raise money for treatment. However, neither the doctors nor medicines helped her.
Marie Duplessis died of tuberculosis in 1847. When Dumas learned about the death of his beloved he closed himself in the room and stayed there for a few days. At the same time he decided to immortalize the name of his beloved by creating novel. The title for it was already known: her lovers and friends called Marie Duplessis the Lady of the Camellias.
The novel, which was published in 1848, brought the young writer fame. The heroine of the novel, Marguerite Gautier, was similar to Mademoiselle Duplessis. Fans of the famous lover suddenly realized that their friend who was selling the feelings for the money, was able to be sincere and vulnerable, she wanted to love and not to hide herself behind the mask of a carefree, cheerful courtesan. 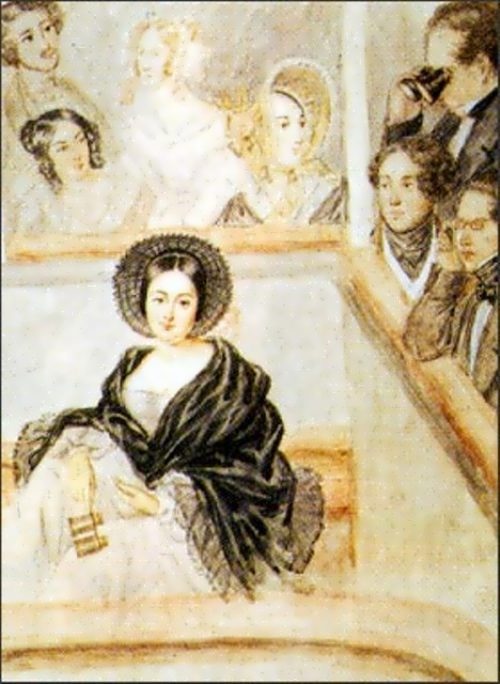 Four years later, in 1852, Alexandre Dumas staged La Dame aux Camelias.
When Alexander was twenty-nine years old, he met a Russian Princess Nadezhda Naryshkina. Their 15-year-old love story was painful and difficult. Green-eyed beauty Nadine was married to the old Prince Naryshkin. Passionate and emotional girl wanted to love and went to Paris. There she and her friends opened a salon which was visited by the most famous men of the French capital: artists, musicians, writers. Dumas soon became the lover of the 26-year-old foreigner. In 1853, they began living together. He wanted to marry Naryshkina but old Prince did not want to divorce her. Seven years later, Nadine gave birth to a girl. In 1864 her husband died and on December 31 she married Dumas.
After the birth of a second daughter Nadine became a disgruntled quarrelsome wife. In 1891, she left Dumas and settled in the house of her daughter. Nadine died in early April 1895, a few months later, on November 27 of the same year the great Frenchman died too.
At the end of his life Dumas bitterly confessed to friends that his marriage with the Russian beauty was the most terrible mistake and the only real feeling he experienced was love to the beautiful Parisian courtesan Marie Duplessis, his evil Lady of the Camellias who had pure and innocent soul. 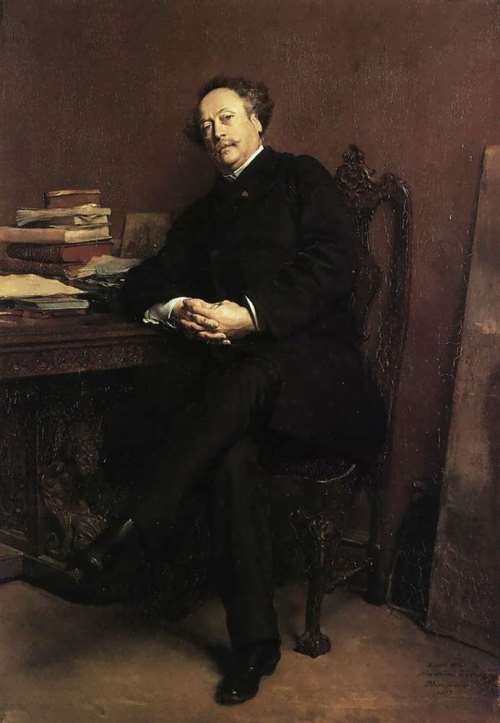 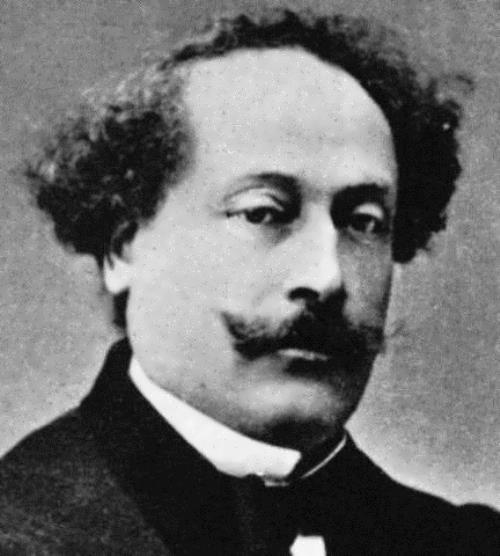 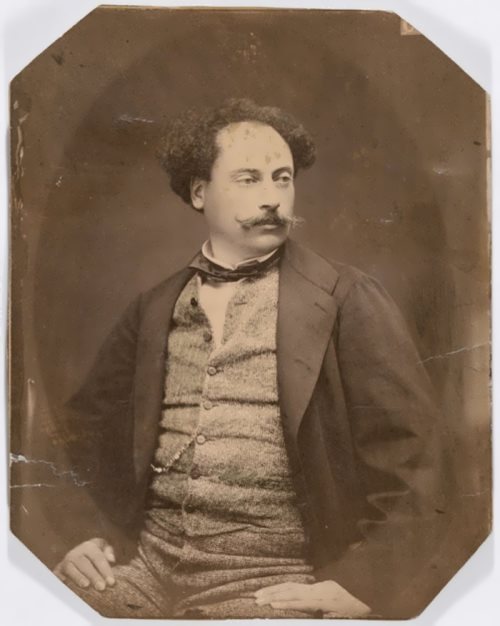