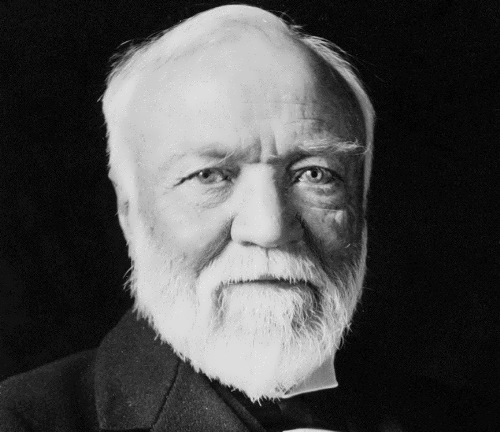 Andrew Carnegie was an American industrialist and philanthropist, one of the first ‘captains of industry’, leader of the American steel industry (from 1873 to 1901). Carnegie made the USA the greatest industrial nation in the world.
Andrew was born on November 25, 1835 in Scotland into a poor working-class family. When he was 12, his family moved to the United States and settled in Pittsburgh, Pennsylvania. 13-year-old Andrew went to work in a cotton factory. It was a hard work – 12 hours a day and six days a week.
Later he became a messenger boy in a telegraph company, and 2 years later a telegraph operator. At the age of 18 he became the head of the telegraph department in Pittsburgh.
Carnegie learned much about the railway business from Thomas Scott, who also helped him with his first investments.
In 1855, Carnegie invested $ 500 in the Adams Express. Carnegie slowly accumulated capital, which later became the basis for his continued success.

In 1863 Carnegie began to make iron railway bridges instead of wooden ones. During the American Civil War, railways were very important. 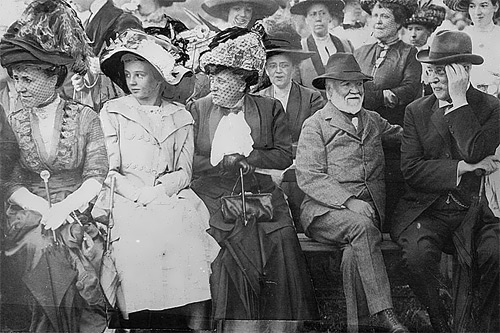 The Carnegie Steel Company became the largest company in the United States. Carnegie was called Steel King.
He became one of the richest men in the world.
In 1901, he sold his company and started to build new libraries and colleges all over the United States of America.
He is known for his charity work. He financed the construction of Carnegie Hall in New York (opened in 1891). He founded the Carnegie Corporation of New York, Carnegie Endowment for International Peace, Carnegie Institution of Washington, Carnegie Mellon University and the Carnegie Museum in Pittsburgh.
In 1903, he gave money to build a Peace Palace in the Netherlands. 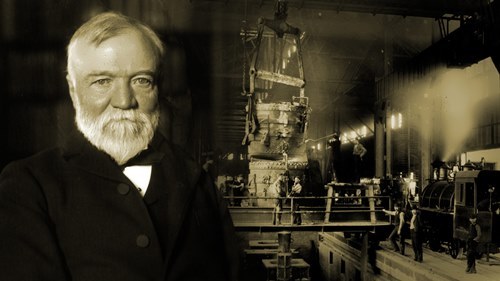 In 1887 Carnegie married Louise Whitfield. Their only child, Margaret, was born in 1897.
He was the author of several books Round the World (1881), An American Four-in-Hand in Britain (1883), Triumphant Democracy (1886). In 1889 Carnegie published an important article Wealth.
Carnegie died on August 11, 1919 at the age of 84, at his summer home near Lenox, Mass. He was buried in Sleepy Hollow, New York. 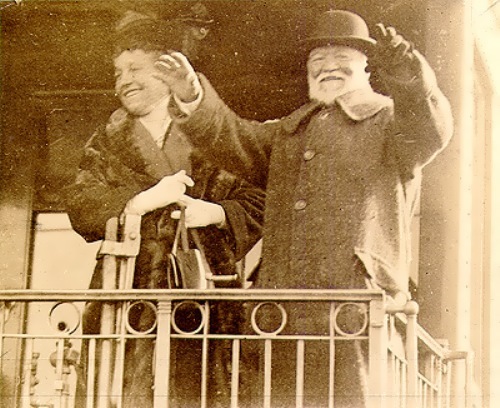 Carnegie and his wife 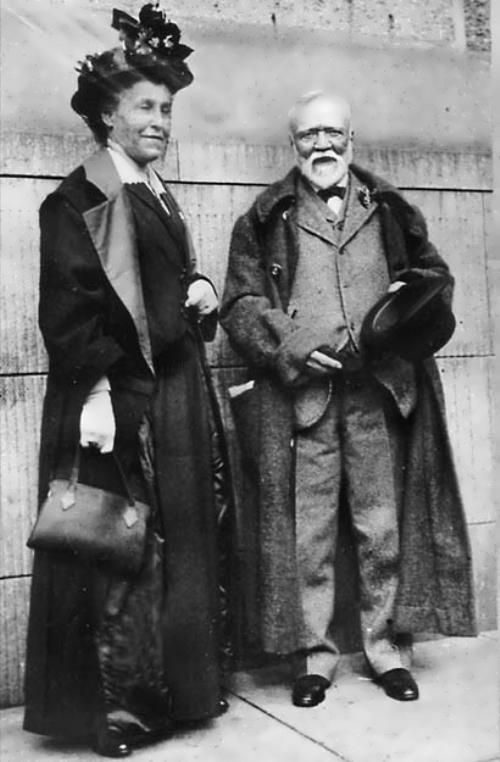 Carnegie and his wife

Famous quotes
– As I grow older, I pay less attention to what men say. I just watch what they do.
– There is little success where there is little laughter.
– Do your duty and a little more and the future will take care of itself.
– The first man gets the oyster, the second man gets the shell.
– When fate hands us a lemon, let’s try to make lemonade.
– The man who dies rich, dies disgraced. 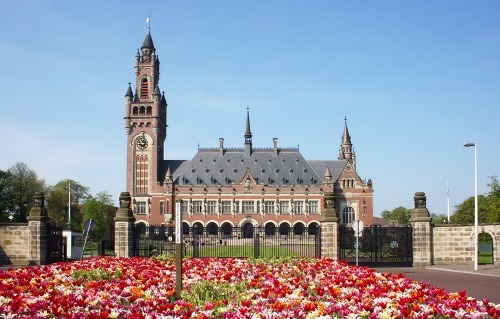 The Peace Palace in the Netherlands

– People who are unable to motivate themselves must be content with mediocrity, no matter how impressive their other talents.
– Concentrate your energies, your thoughts and your capital. The wise man puts all his eggs in one basket and watches the basket.
– He that cannot reason is a fool. He that will not is a bigot. He that dare not is a slave.
– Do your duty and a little more and the future will take care of itself. 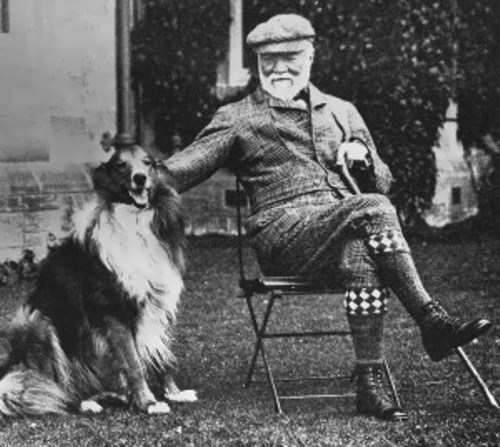 Carnegie and his dog 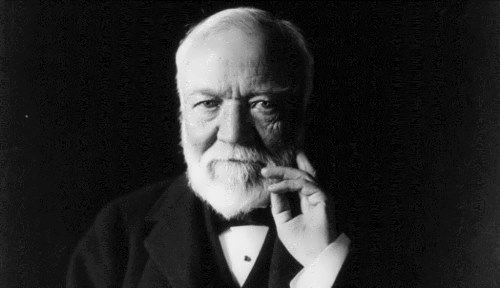 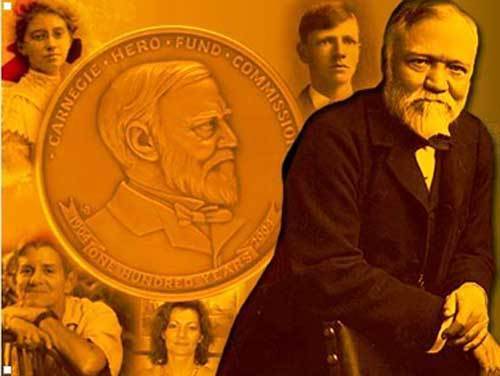 Carnegie – one of the great American success stories 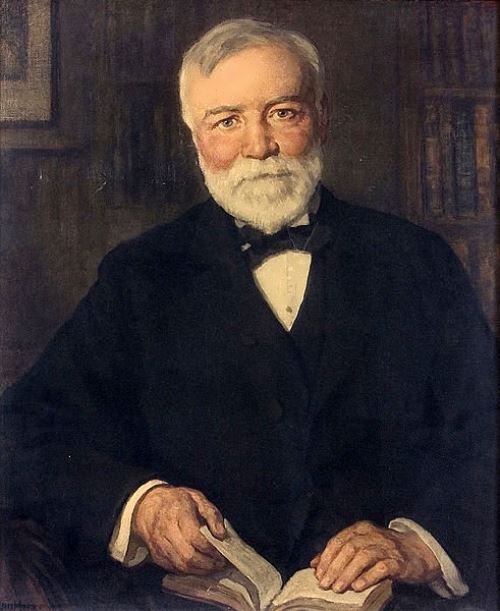 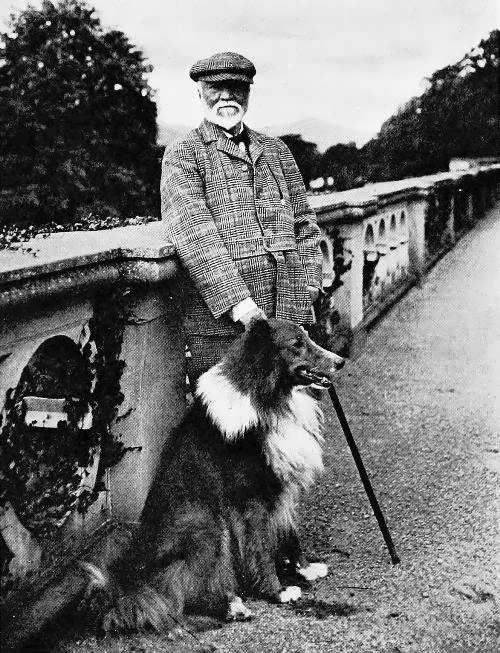 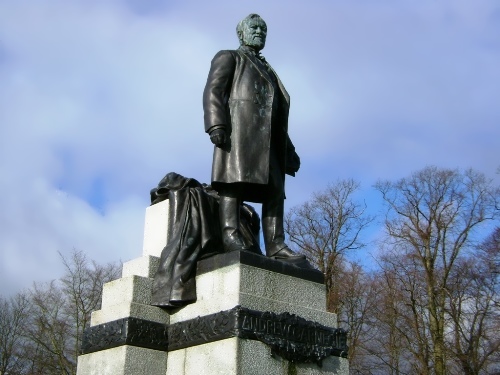 The Statue of Andrew Carnegie in his home town