Benjamin Franklin was a world-famous celebrity – famous for his written words and for his amazing achievements. That fame continues to the present day as Franklin is one of the most recognised names from his time. He was a leader of America’s Revolutionary generation.
Franklin was born on January 17, 1706 in Boston. He was the eighth of 10 children.
At the age of 12, he took a printing apprenticeship with his older brother James who was the publisher of the New England Courrant.
At the age of 16, Franklin became a vegetarian to save money and a year later he left Boston for Philadelphia, Pennsylvania, where he quickly found work in the printing business.

At the age of 22 he opened his own printing shop and began publishing his own newspaper, the Pennsylvania Gazette.
26-year-old Franklin published the first edition of Poor Richard’s Almanac under the pseudonym Richard Saunders.
In 1730, he married Deborah Read. They had two children, Frankie, who died at 4, and Sally, who married Richard Bache. Deborah Franklin also reared her husband’s illegitimate son, William, often his father’s close companion, who was appointed governor of New Jersey and was later to be notable as a loyalist during the Revolution.
In 1736 Franklin was appointed clerk of the Pennsylvania Legislature, and the next year he was appointed deputy postmaster of Philadelphia. He improved mail service in the colonies, establishing 24-hour service between the major cities of Philadelphia, New York and Boston. 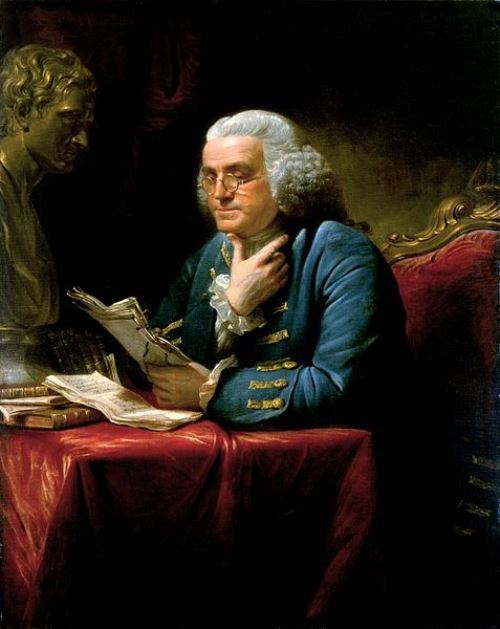 In 1754 the French and Indian War broke out. Franklin was among the delegates called to the Council of Albany to discuss with the British an effective defense of the colonies.
Franklin worked to maintain the peace between the crown and the American colonies, but when he saw that war was inevitable, he became a tireless campaigner for independence at the age of 70 becoming a revolutionary.
Franklin was appointed by the Congressional Congress to help draft the Declaration of Independence. He was one of three commissioners sent to France in 1776, and in February of 1778 treaties of commerce and of defensive alliance were signed.
Of all the founding fathers, Franklin’s signature is the only one on the Declaration of Independence; the Treaty of Alliance, Amity, and Commerce with France; the Treaty of Peace between England, France, and the United States; and the Constitution.
Franklin was among the first to suggest that lightning was naturally occurring electricity. To test this theory, he undertook his famous kite-flying experiment with his son William in 1752. The duo flew a kite made of metallic wire into a storm and lightning struck the kite and electricity travelled down the kite string to a key fastened to a silk ribbon. By dumb luck, the lightning strike was not strong enough to kill the pair.
The invention of the lightning rod, which soon appeared on buildings all over the world, added to his stature. By 1782, there were four hundred lightning rods in Philadelphia.
In 1742, he invented the Pennsylvania fireplace (soon called the Franklin stove), which was a cast-iron fireplace insert that allowed people to warm their homes less dangerously and more efficiently.
At the age of 79, Franklin invented bifocals. 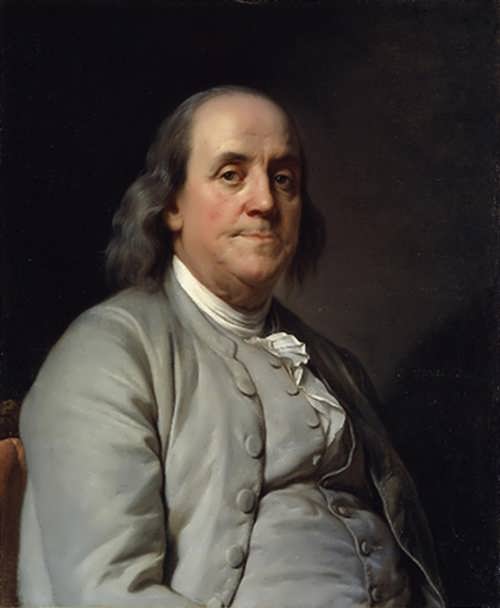 Portrait of Franklin by J. Duplessis, 1785

Franklin could play a variety of instruments including the harp, guitar and violin. He also invented the glass harmonica, which influenced classical music composers for decades.
Franklin died on April 17, 1790 at the age of eighty-four. During his long life he developed many inventions, received numerous honors and achieved an international reputation, becoming one of few Americans of colonial days to do so. 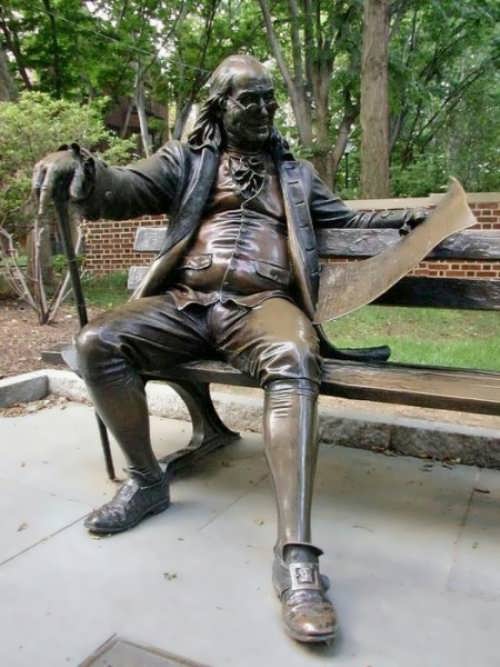 Some of his quotes
– Remember that time is money.
– A penny saved is a penny earned.
– Any fool can criticise, condemn and complain and most fools do.
– Early to bed, early to rise makes a man healthy, wealthy, and wise.
– Fish and visitors smell in three days.
– Genius without education is like silver in the mine.
– God helps them that help themselves.
– Hide not your talents. They for use were made. What’s a sundial in the shade?
– It is hard for an empty bag to stand upright.
– Little strokes fell great oaks.
– Never leave that till to-morrow which you can do to-day.
– Three may keep a secret, if two of them are dead.
– Well done is better than well said.
– In this world nothing can be said to be certain, except death and taxes.
– There never was a good war nor a bad peace.
– Never contradict anybody.