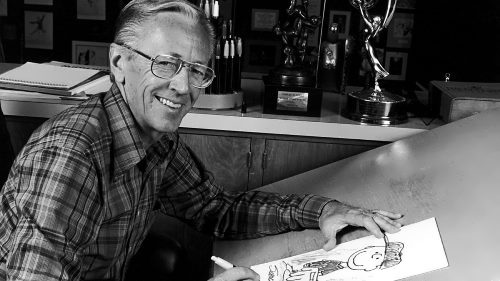 Charles Schulz was an American cartoonist, author of Peanuts comic strip about a boy, Charlie Brown, and his dog Snoopy, on which he worked for fifty years. His nickname was Sparky. The series has received international recognition and is considered one of the most successful comic books of all time. Schultz was awarded the Congressional Gold Medal posthumously. Schulz was the winner of two Reuben awards from the National Cartoonists Society, two Peabody, and five Emmy awards and a member of the Cartoonist Hall of Fame.
Charles Monroe Schulz was born on November 26, 1922 in Minneapolis, Minnesota. His uncle called him Sparky after the horse from Barney Google. As a child and teenager, Charles was very shy. He loved to draw as a child. His first published cartoon was a drawing of his small black-and-white dog, Spike. This drawing appeared in a newspaper in 1937.
After his mother’s death in 1943 he was enlisted in the US Army and went to Europe during World War II. After the war, Schultz returned to Minneapolis, where he began working as an art teacher.

Li’l Folks was his first work, where children were the main characters. A boy named Charlie Brown was among them. The series was not successful.
In 1949 Schulz married Joyce Halverson. They had five children. The couple divorced in 1972. In 1973 he married Jean Clyde. 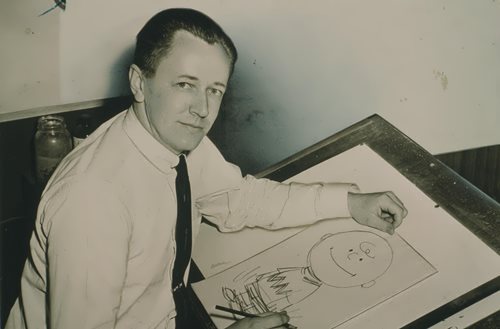 In 1950 Peanuts made its debut in seven newspapers with the characters Charlie Brown, Shermy, Patty, and Snoopy. The series has had great success and is considered one of the most popular. The main character, Charlie Brown, was named after his classmate at art school. Schulz’s characters later appeared in several animated television specials.
In 1967, an off-Broadway production, “You’re a good man, Charlie Brown” was staged.
In 1969, National Aeronautics and Space Administration astronauts named their command module Charlie Brown and their lunar lander Snoopy.
Charles Monroe Schulz died on February 12, 2000.
Schulz also was awarded the Yale Humor Award, 1956; School Bell Award, 1960; and honorary degrees from Anderson College, 1963, and St. Mary’s College of California, 1969.
In 1980 the United Feature Syndicate created Charles M. Schulz Award. 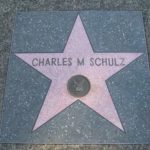 Star on the Walk of Fame 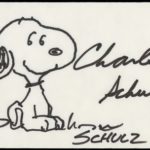 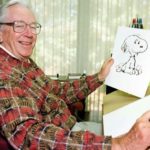 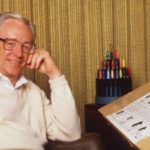 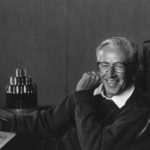 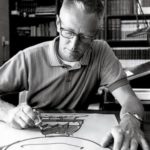