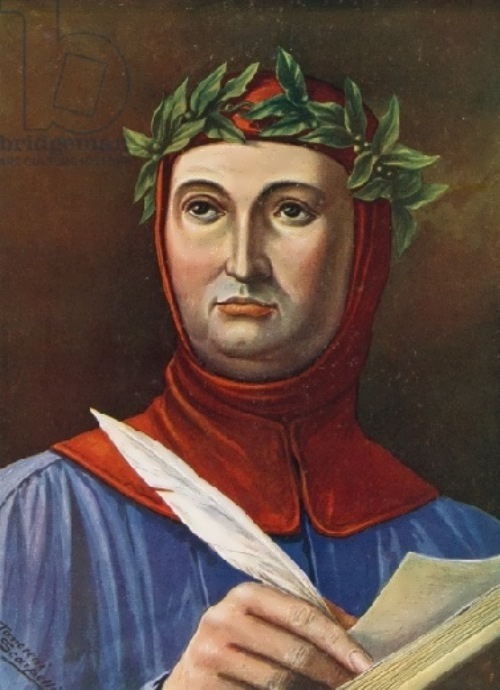 Francesco Petrarca (or Petrarch) was a Renaissance humanist, historian, and poet. He is widely recognized as the “father of humanism.” He played a major role in launching the Renaissance in literature.
Francesco Petrarca was born on July 20, 1304 in Arezzo. His father, Pietro di Parenzo, was a notary who had migrated to Florence from his hometown of Incisa. In 1305, Petrarch and his mother, Eletta Canigiani, moved to Incisa, where his brother Gherardo was born in 1307. The family spent six years in Incisa and moved to Pisa in 1311. The following year they moved to Carpentras in southern France. In 1316, his father decided that Petrarch should become a lawyer and sent him to the University of Montpellier.
In 1320, Francesco and his brother went to Bologna to continue his legal studies. When his father died in April 1326, he returned to Avignon.
On April 6, 1327 in the Church of Saint Clare in Avignon, Petrarch saw and fell in love with a woman who inspired his poetic imagination for the rest of his life.

In 1330, Petrarch became a member of the cardinal’s staff and was able to travel and meet many people. He became friends with Dante Alighieri, author of the Divine Comedy, and Giovanni Boccaccio, author of the Decameron. 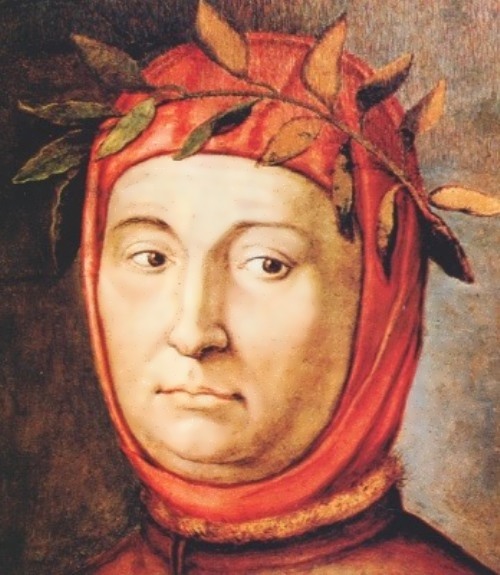 In 1336 Petrarch first journeyed to Rome. In 1337 he returned to Avignon. During this period Petrarch began several of his works. His epic poem, Africa, narrates the victory of Scipio Africanus over Hannibal. De viris illustribus is a study of famous men. Secretum consists of three imaginary dialogues between Petrarch and Saint Augustine.
Petrarch achieved great fame with his Canzioniere, a book of songs. It is a collection of his love poems to his beloved Laura.
In 1341 he was crowned poet laureate in Rome for his achievements in Latin literature.
He wrote autobiographical information in a Letter to Posterity (the Latin title is Ad posteros or Posteritati), to future generations who might be curious to learn more about him and his life. Petrarch fashioned his own identity, created his own historical persona, and delineated his role in the events of his time. In the Letter to Posterity, Petrarch spoke about his family and friends, his personal habits, his travels, the cities where he lived.
Francesco Petrarca died on July 19, 1374 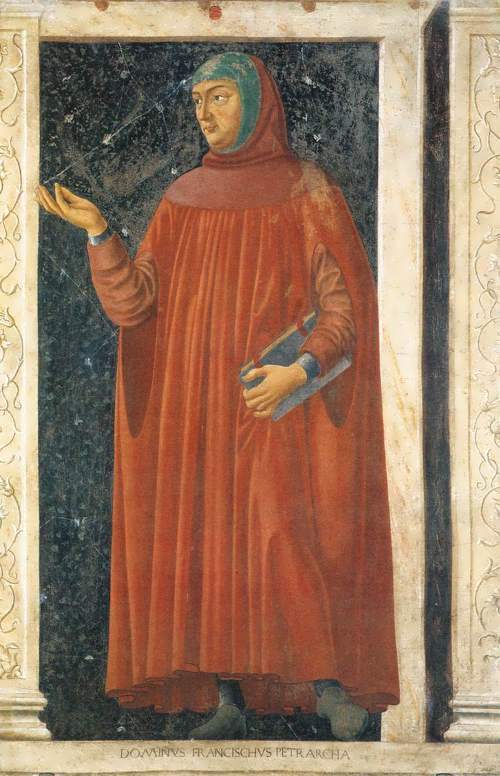 The great poet of the European Middle Ages, one of those who stood at the start and laid the foundations of the Renaissance, incomparable Francesco Petrarca had his great muse – Laure de Noves (1301-1348). The woman won the heart of a poet and inspired him to create inimitable sonnets.
He met her on Good Friday on April 6, 1327. He was a young, 23-year-old recognized poet and she was a 26-year-old married woman. Laura gave birth to eleven children. Blond, with huge and kind eyes, she seemed the epitome of femininity and spiritual purity.
The beautiful woman was the muse of the poet in a dream of eternity. The more she grew old, the more he admired her femininity and charm. 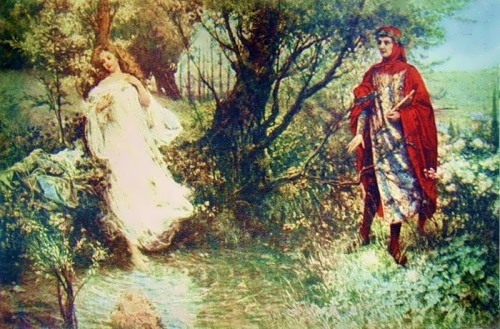 Ideal mental traits of the character in poetry of Petrarch became the basis of hard debate between literary scholars who study the life of the poet. Some argue that Laura is just a perfect image from the imagination of the great hermit, and Laura de Noves was a clever camouflage of the fiction. Others do not doubt that Laura was real and Petrarch was really passionately in love with her. Perhaps Laura de Noves was the wife of a local knight Hugues de Sade, an ancestor of the famous French novelist, Marquis de Sade.
They met in the streets of Avignon, in churches. She was with her husband and he looked at her and was happy. They didn’t even say ‘Hello’ to each other. But every time he saw her the poet returned home and wrote sonnets dedicated to her. Did Laura know about his feelings? Could she know that she was linked to one of the greatest poets of the world forever? Her name became symbol of the undivided love of a man to a woman.
He had a great platonic love to Laura. But that did not stop him from having love affairs with other women. In 1337 his son Giovanni was born and six years later, in 1343, his beloved daughter Francesca was born. She lived with her father and took care of him until the end of his days.
Laura died on April 6, 1348 during a raging plague in Europe. On the same day, twenty-one years before the poet met his muse. Francesco Petrarca was depressed.
After Laura’s death Petrarch wrote Verses on the death of Madonna Laura, Triumph of Death, and Triumph of Fame. He continued to love her devoting her beautiful sonnets. 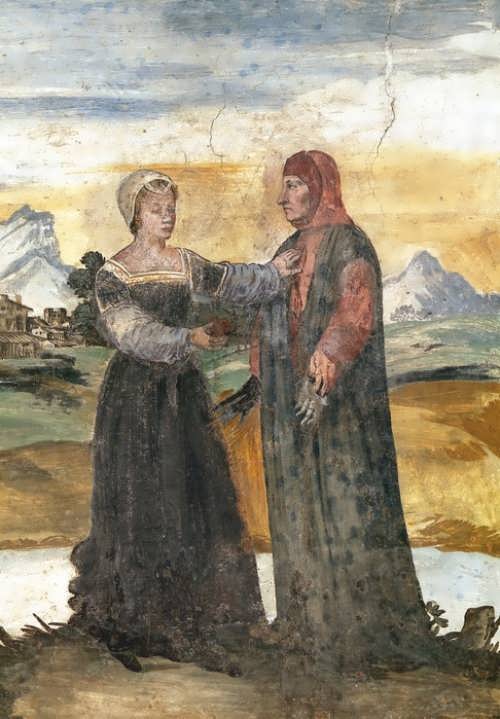 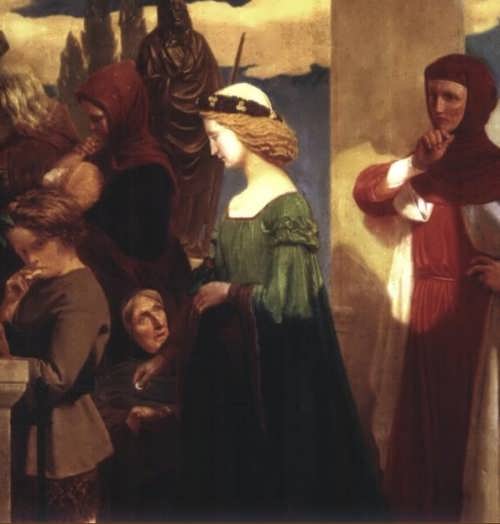 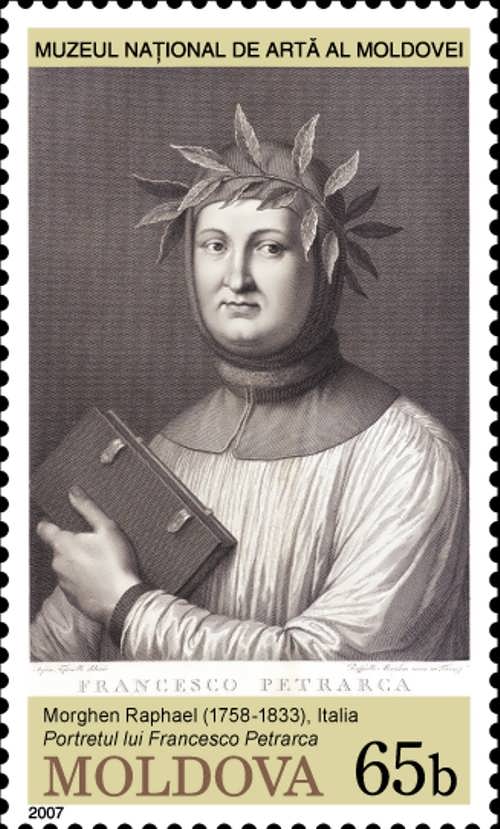 Stamp of Moldova dedicated to Petrarch 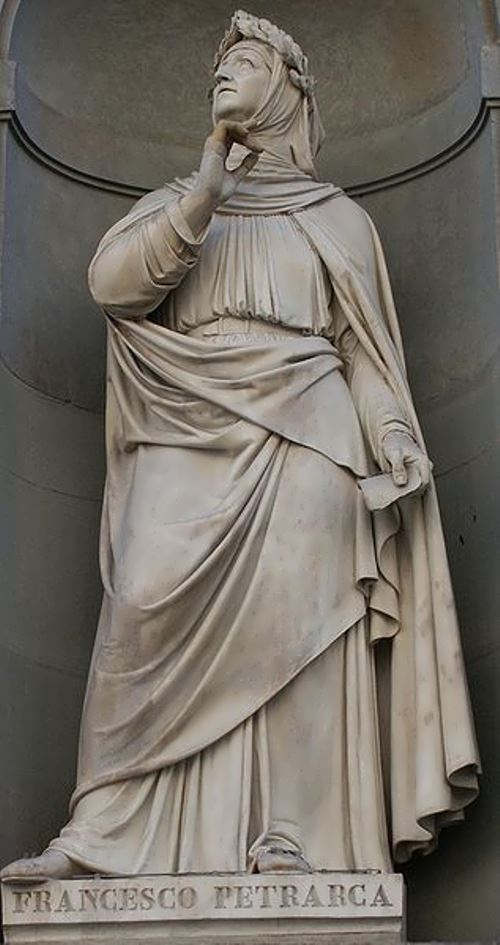 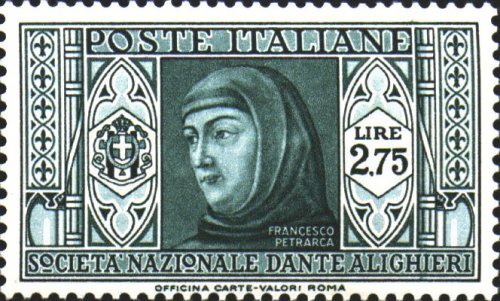