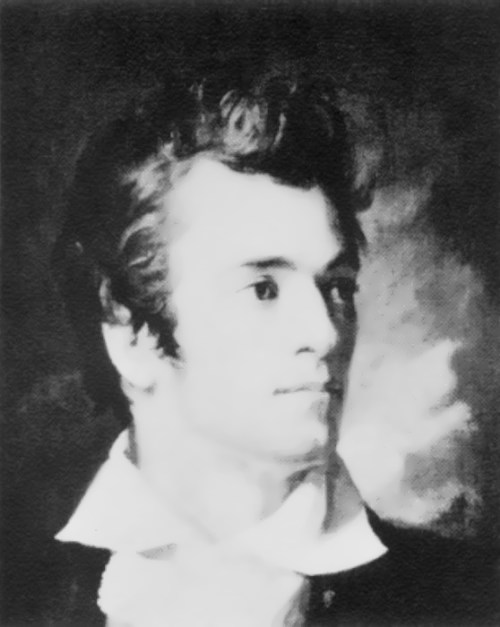 George Catlin was an American traveler and painter. He devoted most of his life to drawing and painting Indians. He traveled from tribe to tribe, often alone and almost always made welcome, and he came to know and understand the Indians and their way of life.
He studied the life of 48 Indian tribes for 8 years. Catlin published “Illustrations of the manners, customs and condition of the North American Indians” (with 300 engravings, London, 1841; 1876). In 1844, he published a portfolio of 25 drawings of hunting scenes from the life of the West. In 1848, he published “Notes of eight years travels and residence in Europe” and in 1867 – “Last rambles amongst Indians, Rocky Mountains and Andes”.
George was born on July 26, 1796 in Wilkes-Barre, Pennsylvania into a farmer’s family. He was the fifth of 14 children. His mother, Polly, at the age of 8 years (1778) was taken captive by the Indians, but later returned to the civilized world. As a child, George heard a lot of stories about her adventures.

He studied law in Litchfield, Connecticut, worked as a lawyer in Luzerne County, Pennsylvania, but then became interested in the fine arts. At the age of 21 he was already a good portraitist. The visit of a group of 15 Indian chiefs in Philadelphia in 1824 inspired him to paint Indians. He made a trip to the eastern reservations, as well as painted portraits of the leaders who visited Washington.
In 1828 Catlin met there Clara Bartlett Gregory, whom he married.
In 1830 he went to St. Louis, where he befriended the famous explorer William Clark. Within two years, he painted portraits of Indian delegates. Once Catlin painted a portrait of the chief of the Black- feet surrounded by his own warriors, while their enemies, the Crow, sat around the room and watched.
In March 1832, with the support of Clark he traveled up the Missouri on a steamboat “Yellowstone” belonged to the American Fur Company. 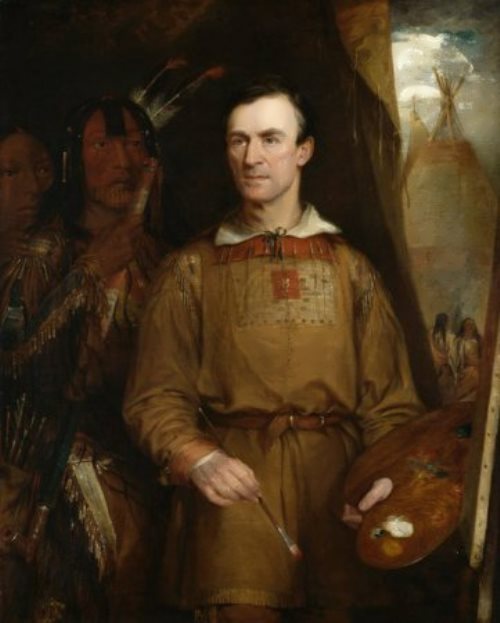 In the spring of 1833 he went to Fort Laramie, Wyoming, and then to the Great Salt Lake, Utah. After returning to St. Louis he spent the winter in Pensacola, Florida, then moved to New Orleans. In the spring of 1834 he left New Orleans and went to Fort Gibson in Indian Territory, where he painted portraits of the Cherokee, Choctaw, screams, Osage, and others.
In 1835-1836 Catlin painted Indians in Minnesota and Wisconsin. These were his last trip to the Wild West region.
In 1852-1857 Catlin traveled across South and Central America, as well as visited Far West, reaching Alaska. His memories of trips to the Great Plains were published in 1841.
George Catlin died on December 23, 1872 in Jersey City.
The Indians called him “Man with the Blue Eyes”, ‘“Magic Painter” and regarded him with awe.
A mineral, sacred to the Indians of the Great Plains, was named in his honor. Since at least the XVII century the Indians made pipes of peace from this mineral. 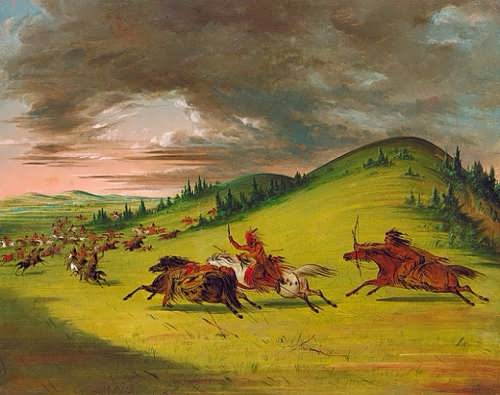 Battle Between Sioux and Sac and Fox 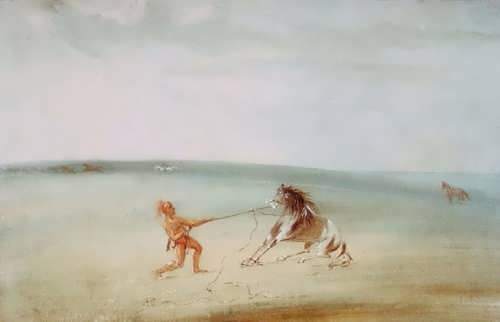 Breaking Down the Wild Horse 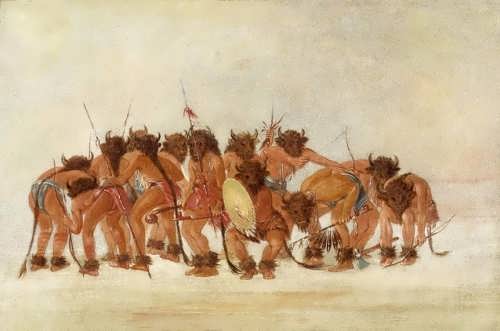 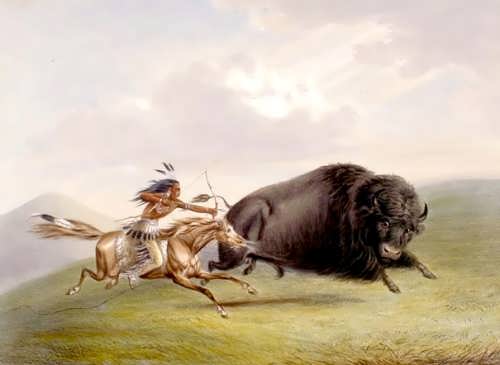 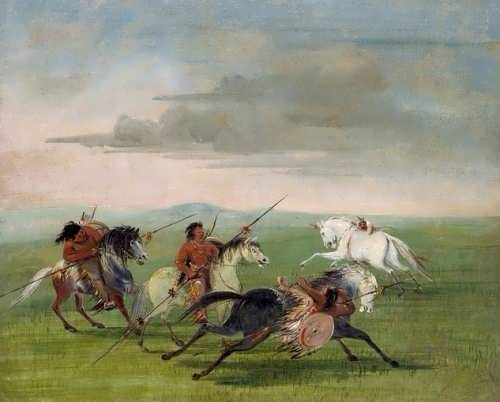 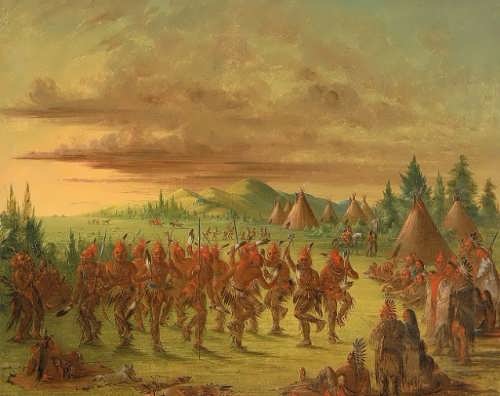 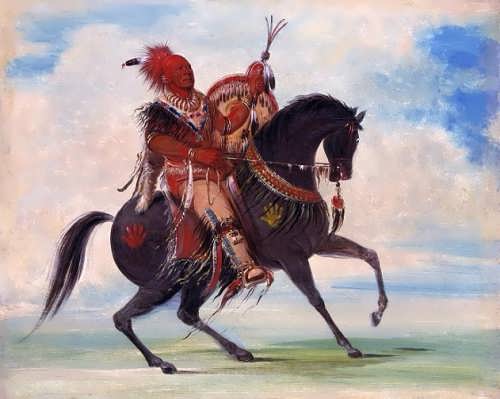 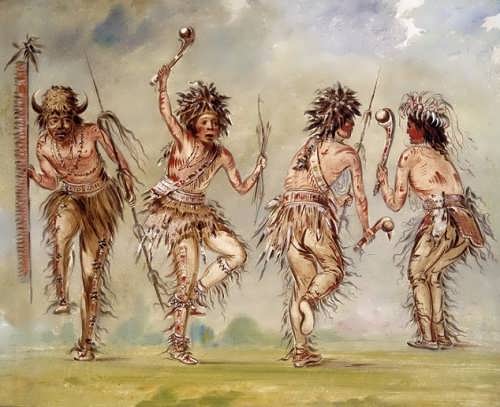 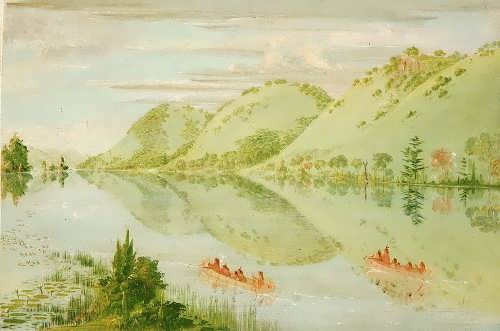 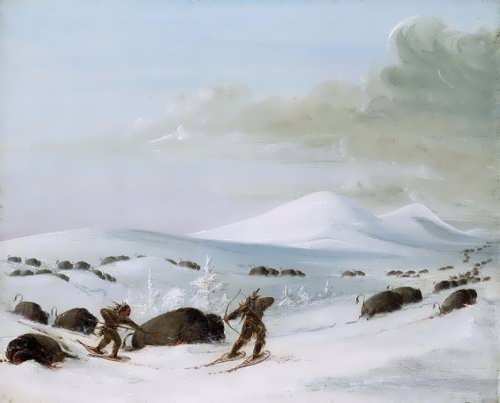 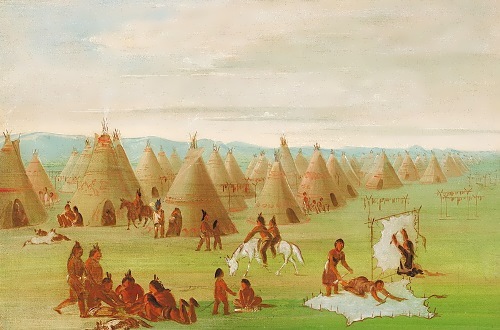 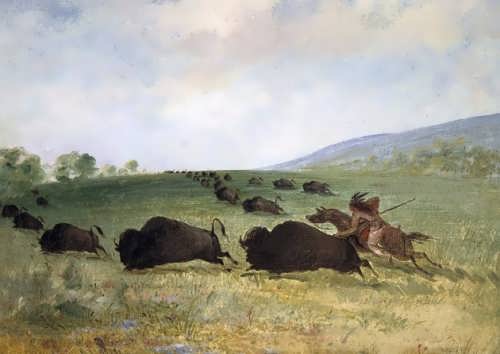 An Osage Indian Lancing a Buffalo