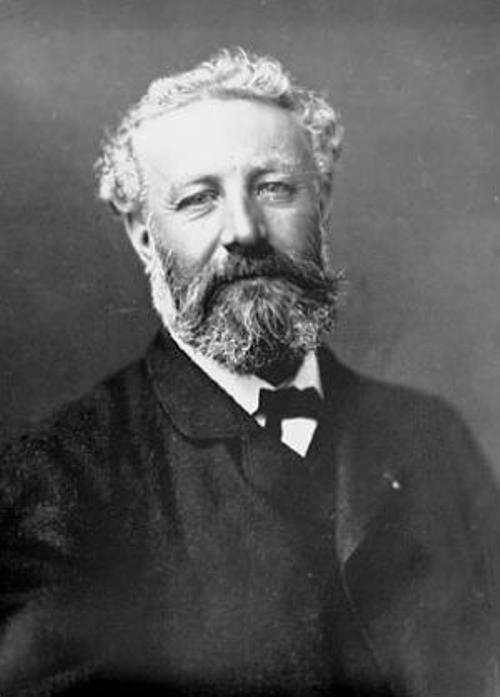 Jules Verne was a French geographer and writer, a classic of adventure literature. He is known as one of the first science fiction writers. He was a member of the French Geographical Society. Although his work had both geographical and scientific flaws, Verne’s book was ahead of its time.
Jules Gabriel Verne was born on February 8, 1828 in Nantes, France. He was the first of five children. As a young boy Verne often went sailing with his brother on the Loire River in France.
On January 10, 1857 Jules married Honorine de Viane (nee Morel), a widow with two children from her first marriage. Four years later, on 3 August 1861, Honorine gave birth to his son Michel, their only child. The son of the writer filmed several works of his father: Twenty Thousand Leagues Under the Sea (1916), La Destinée de Jean Morénas (1916), Black India (1917), Southern Star (1918), The Begum’s Fortune (1919). His grandson, Jean-Jules Verne (1892-1980), was an author of a monograph on the life and work of his grandfather. He worked on it for 40 years. The great-grandson – Jean Verne is a famous opera tenor. It was he who found the manuscript of the novel Paris in the XX century, which for many years was considered a family myth.

The son of a lawyer, Verne studied law in Paris, but he was always fond of literature. In 1850, his play Broken Straws was successfully staged in the Historical Theater by Alexandre Dumas.
In 1859 he traveled to England and Scotland and in 1861 to Scandinavia.
In 1863 Verne published the first novel in the series Extraordinary Voyages – Five Weeks in a Balloon. The success of the novel inspired the writer. 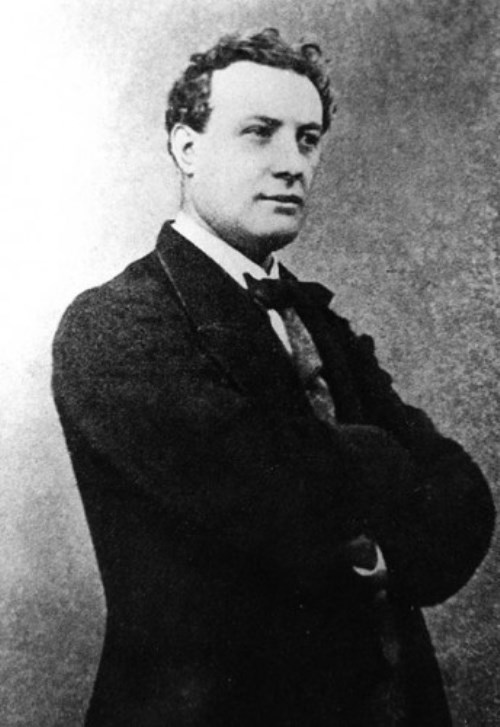 A Journey to the Center of the Earth (1864) describes the adventures of a party of explorers and scientists who descend the crater of an Icelandic volcano and discover an underground world. The Adventures of Captain Hatteras (1866) centers on an expedition to the North Pole. In From the Earth to the Moon (1865) and Round the Moon (1870), Verne describes how two adventurous Americans arrange to be fired in a hollow projectile from a gigantic cannon that lifts them out of the earth’s gravity field and takes them close to the moon.
Verne wrote about his imaginary sea adventures in Twenty Thousand Leagues Under the Sea (1870). He named his imaginary submarine the Nautilus, after an actual submarine built in 1800.
On March 9, 1886, Verne’s mentally unstable nephew, Gaston, shot him with a pistol. A bullet entered Verne’s left shin, giving him an incurable limp.
In 1892 the writer became a Knight of the Legion of Honor. 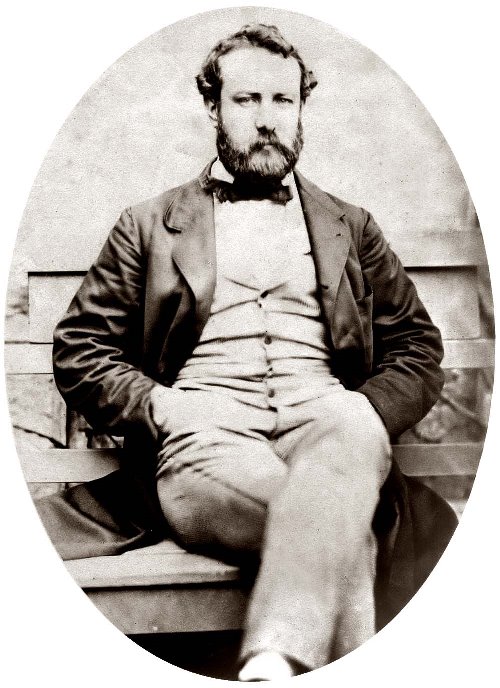 Shortly before his death Verne became blind, but continued to dictate the book.
Jules Verne died on March 24, 1905 in Amiens, France at the age of 78.
Verne wrote 66 novels (including unfinished and published only at the end of the XX century), 20 stories and short stories, more than 30 plays, several documentaries and scientific works. His works were translated into 140 different languages and were the basis for a number of popular movies.
In 2015, Russia’s first monument to Jules Verne was established in Nizhny Novgorod.
In his works, Verne predicted discoveries and inventions in various fields, including aqualung, television (Paris in the Twentieth Century) and space flights (From the Earth to the Moon), as well as electric chair, the aircraft (The Lord of the World), helicopter (Robur the Conqueror), the tunnel under the English Channel (School of Robinsons) and many others. 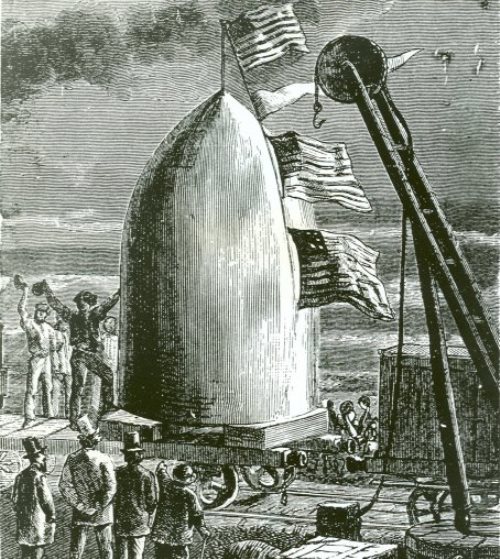 Illustration to From the Earth to the Moon 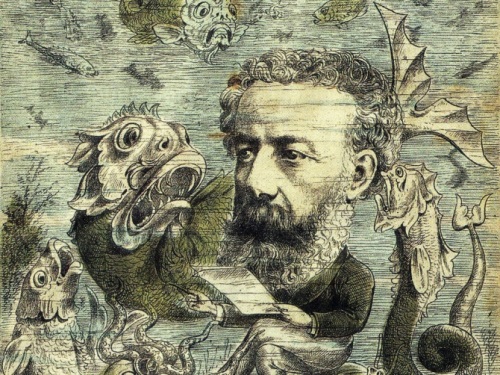 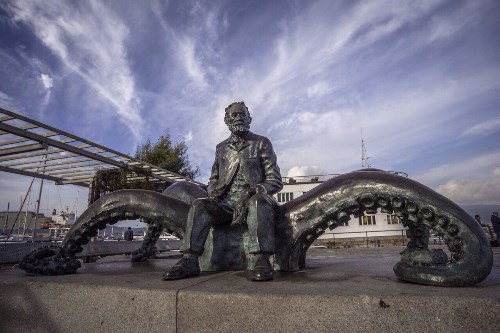 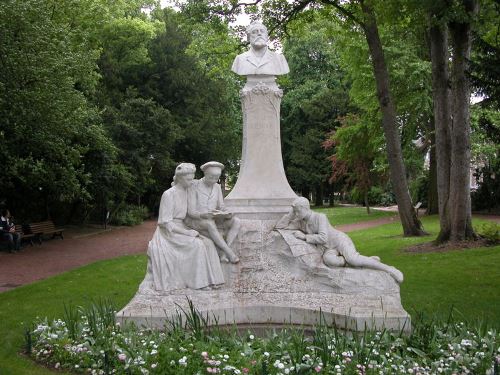 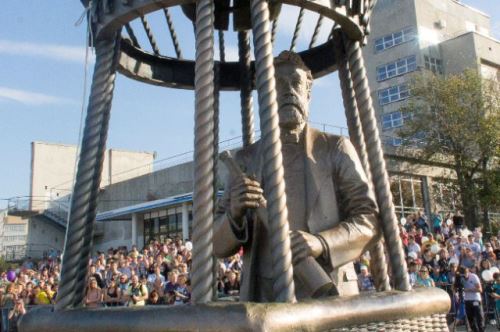 Monument to Verne in Nizhny Novgorod 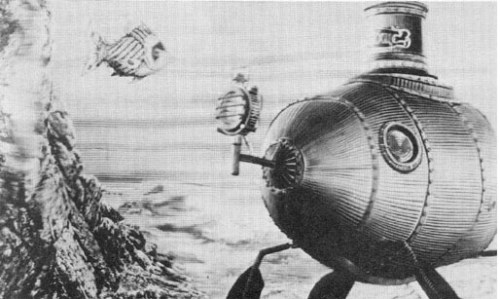 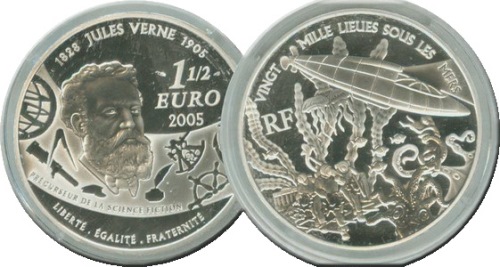 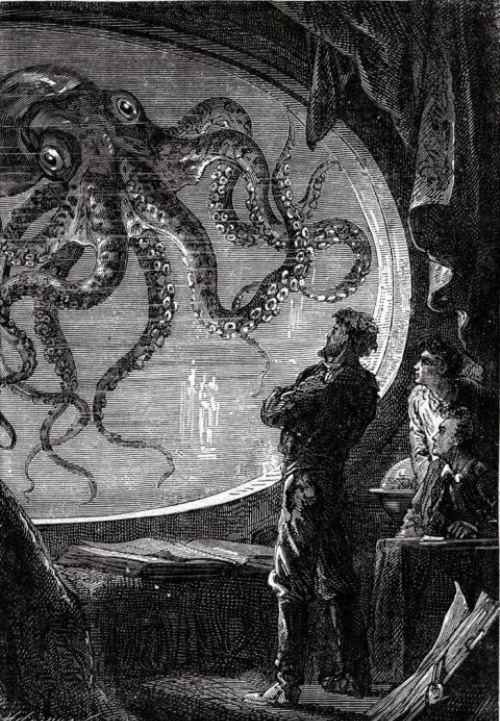 Illustration to Twenty Thousand Leagues Under the Sea