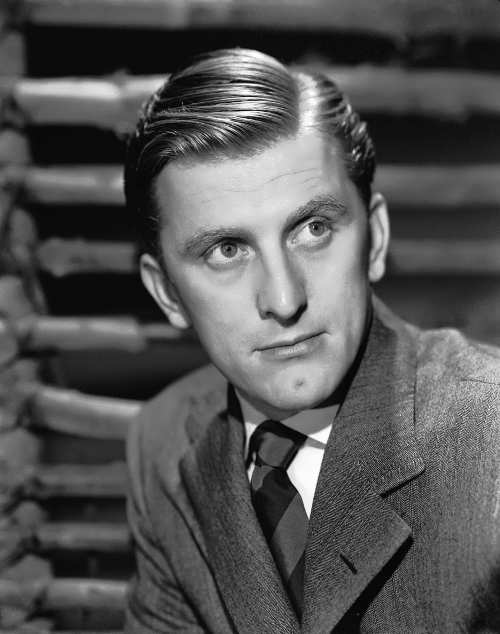 Kirk Douglas is an American actor, one of the last living stars of Hollywood “golden age”, writer, philanthropist and former goodwill Ambassador for the US State Department. In 1996 he was awarded Oscar. For his role as Vincent Van Gogh in the biographical film Lust for Life Kirk received Golden Globe award. Douglas has written ten novels and memoirs. At the moment, the actor takes the 17-th place in the list of the American Institute of cinematography among the greatest male screen legends of classical Hollywood cinema and the first place among the living ones.
His son Michael Douglas is a successful film star.
Issur Danielovich and later Izzy Demsky (his real name) was born on December 9, 1916, Amsterdam, New York. He was the fourth child into a poor Jewish family. Issur was the only boy and has six sisters. His parents emigrated to the United States in 1910, two years after their marriage. The parents changed the family name to Demsky.

The boy grew up in a small Jewish community and suffered from anti-Semitic attacks. The family was poor and the boy had to earn money himself. Since childhood he had a dream to become an actor.
In 1939, Issur graduated from St. Lawrence University and went to New York. There he entered prestigious American Academy of Dramatic Arts. He moonlighted as a waiter in a small cafe. The head of the student troupe Karl Malden offered to change the name to Kirk Douglas. He studied in the same group with Betty Joan Persky, later better known as Lauren Bacall. It was Lauren who helped Kirk to find his first roles.
During the World War II Douglas served in one of the communication units of the US Pacific Fleet. In November 1943, Kirk was wounded and in the hospital he married Diana Dill. 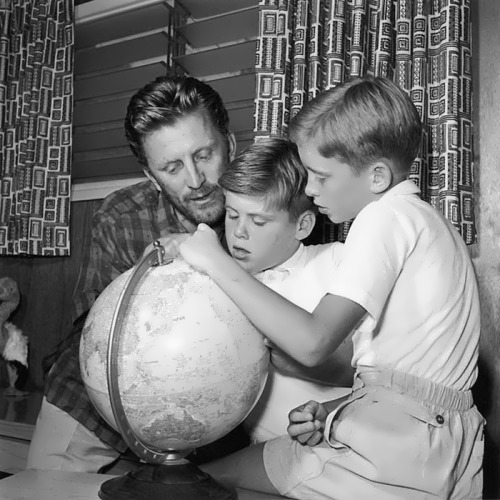 Kirk Douglas with his sons

When Douglas returned to New York he began his acting career. He played in the theater, was engaged in radio plays and advertising.
In 1945 he moved to Hollywood. In 1946, Lauren Bacall, who at that time was known in Hollywood, recommended Kirk to producer Hal Wallis. So, Douglas debuted on the big screen. In the drama The Strange Love of Martha Ivers by Lewis Milestone, he played the role of the heroine’s husband. Wallis was impressed and offered Douglas a seven-year contract with the studio. However, Douglas signed a contract with Warner Brothers.
The next three years he was engaged only in supporting roles in the films Out of the Past (1947) and A Letter to Three Wives (1949). In 1948 he starred together with Burt Lancaster in the film I’m always alone. The actors co-starred in seven films.
In the film The Great Sinner his partners were Ava Gardner and Gregory Peck. The film Champion by Stanley Kramer was a success and brought Kirk the first nomination for Oscar.
Since the beginning of 1950s, Douglas became one of the leading actors. The film The Bad and the Beautiful by Vincent Minnelli, brought Douglas the second nomination for Oscar. 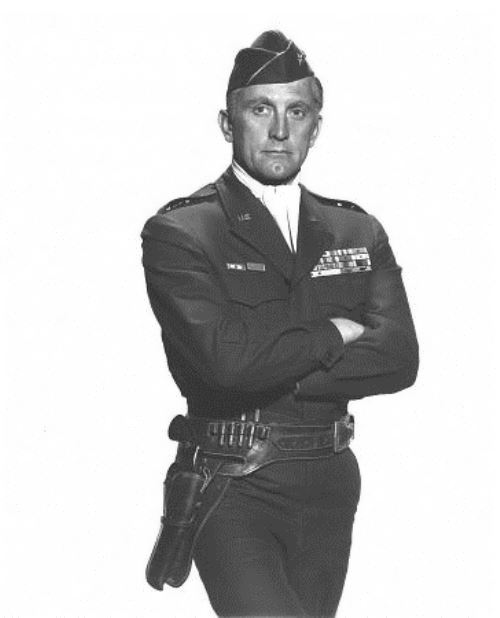 In the film Lust for Life Douglas played the role of Vincent Van Gogh.
In 1955, he founded his own production company and named it in honor of his mother Bryna Productions.
In 1973, Douglas debuted as director with the film Scalawag.
Since the mid-1970s, the actor began to try himself in television productions. One of these performances was the drama Victory at Entebbe in which Douglas played with Lancaster again. For the role in the Australian film The Man from Snowy River Douglas was nominated for Emmy.
In the early 1990s, the actor starred in several television productions and documentaries. His last work was the role in the comedy Greed.
In 1988, he released his first autobiography The Ragman’s Son. Then Douglas wrote several fictional books: Dance with the Devil (1990), The Secret» (1992) and Last Tango in Brooklyn (1994). 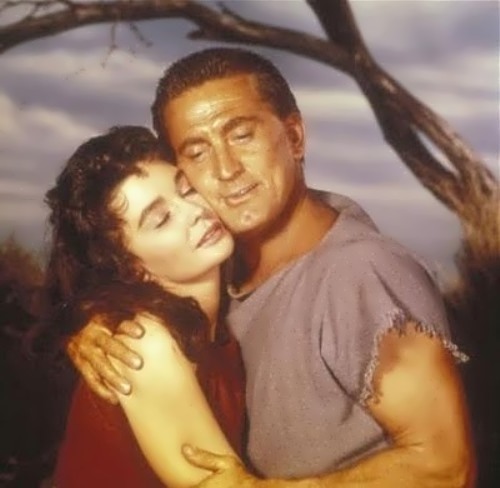 His second autobiographical book Let’s face it: 90 years of living, loving, and learning is about his career, Hollywood stars and anti-Semitism in America.
On February 27, 2011 94-year-old Douglas took part in Oscar ceremony.
On December 9, 2016 the actor celebrated his 100th birthday. His son Michael and his wife Catherine Zeta-Jones organized the celebration. About 200 friends and family members, including director Steven Spielberg and producer Jeffrey Katzenberg, were invited. 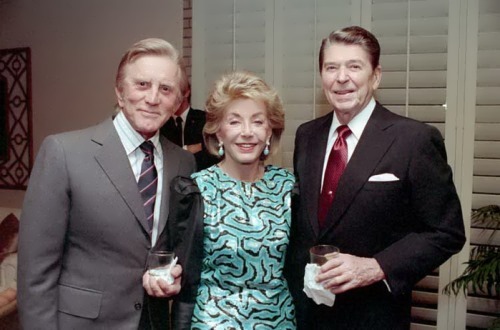 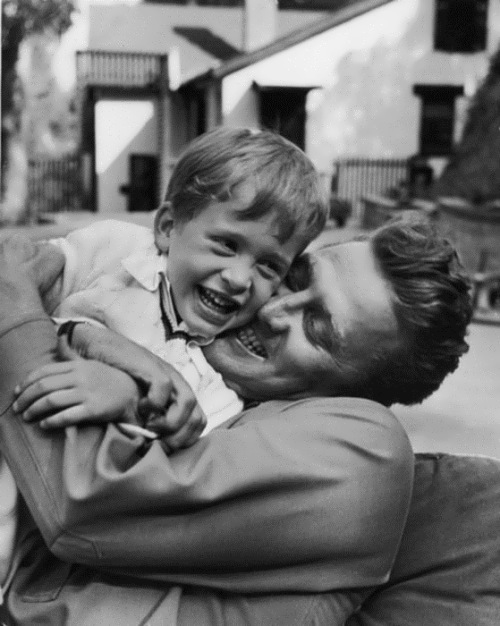 Kirk Douglas with his son

Kirk Douglas in the film Champion 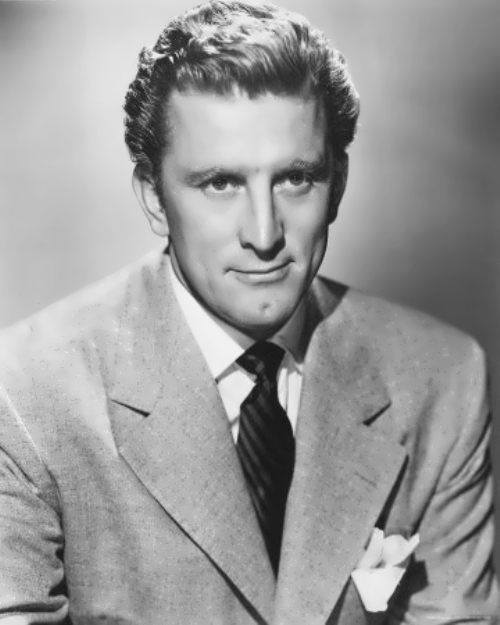 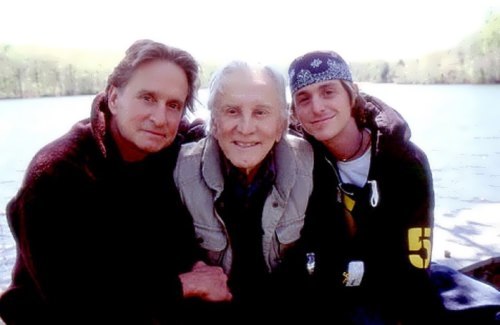 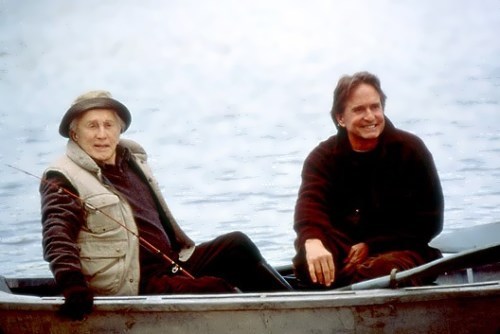 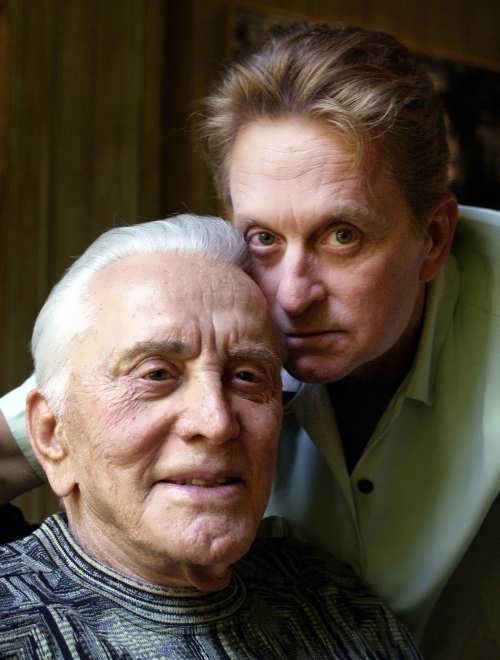 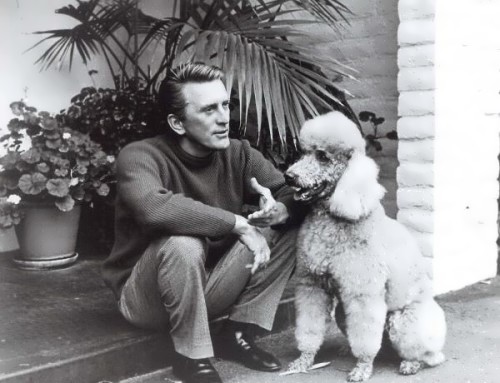 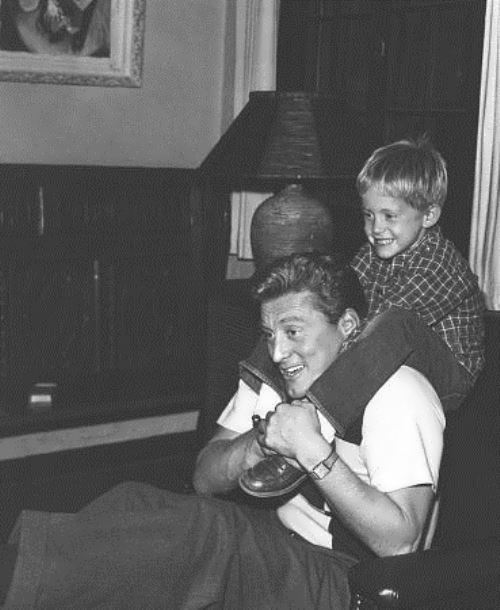 Kirk Douglas with his son 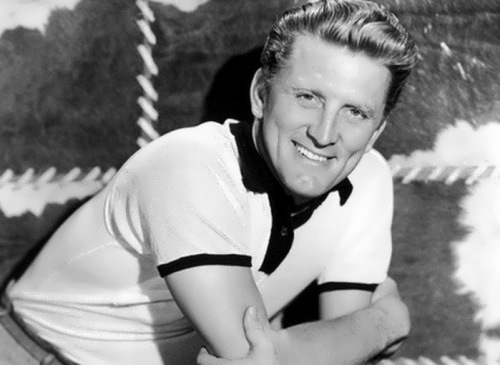 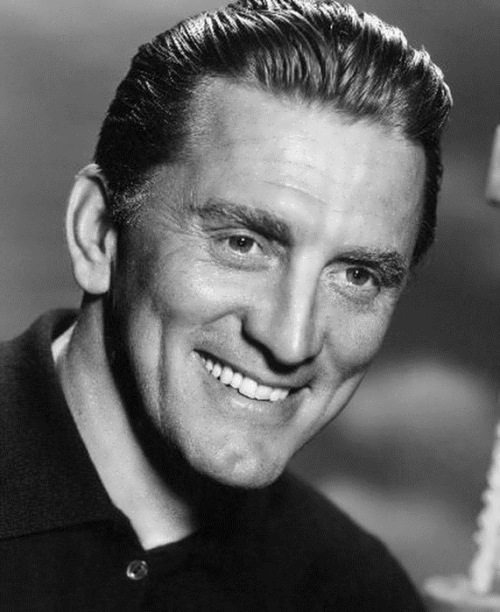 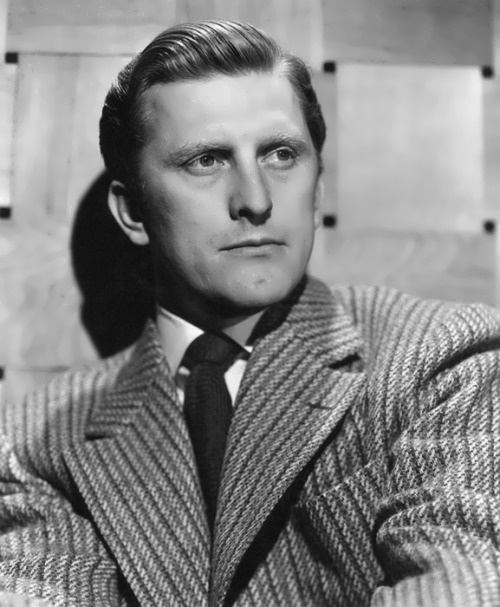 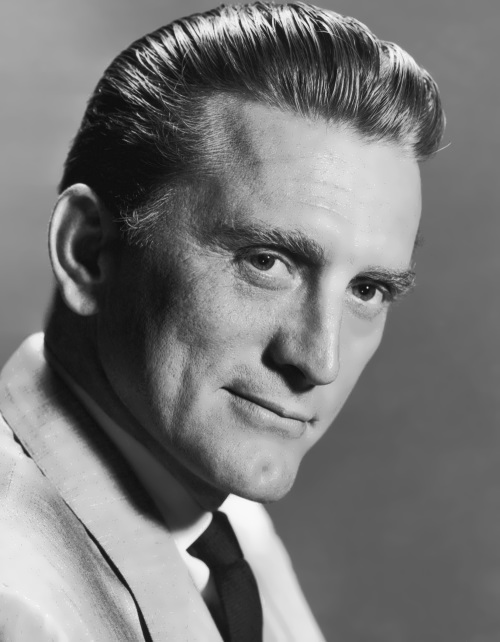 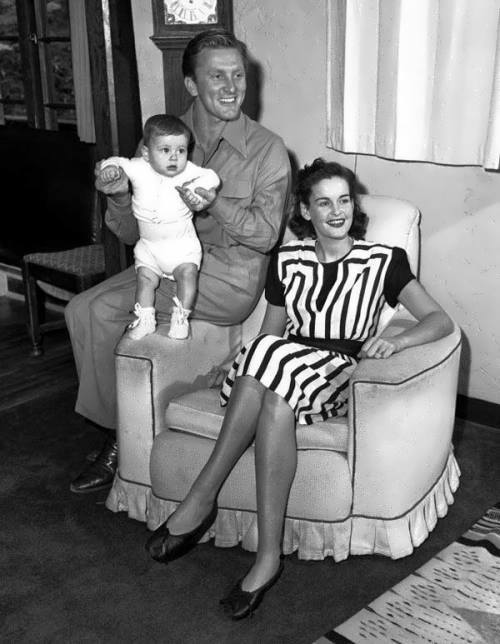 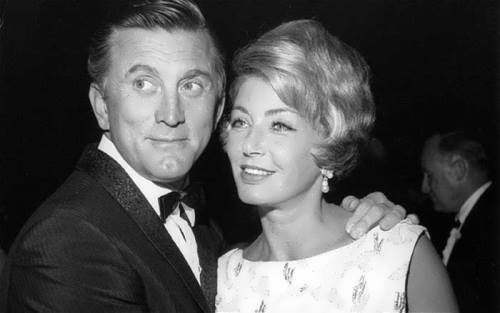 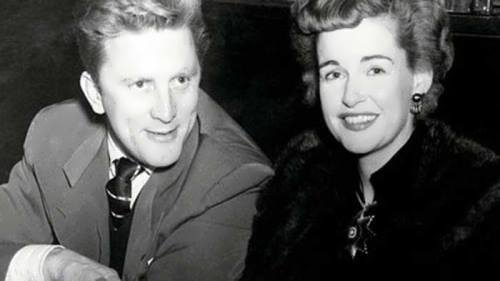 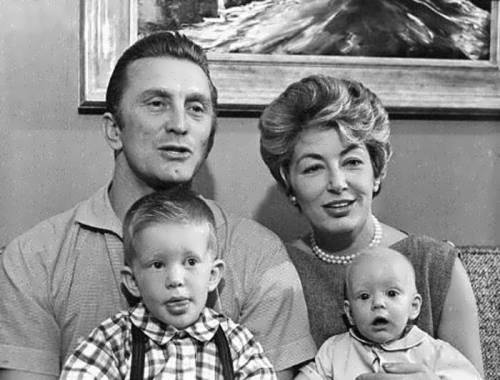 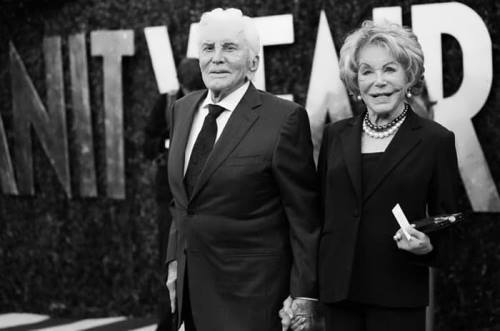 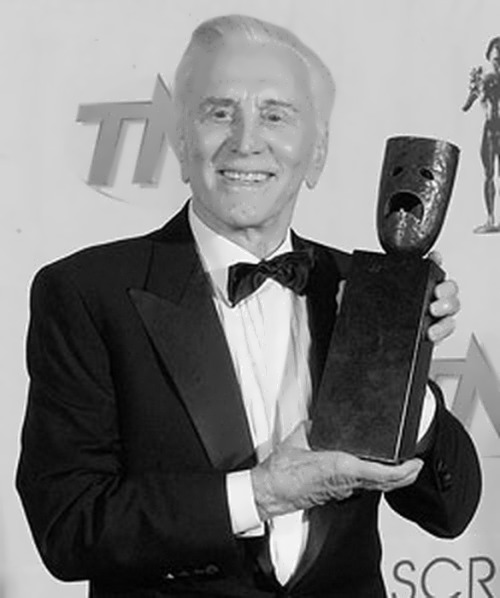 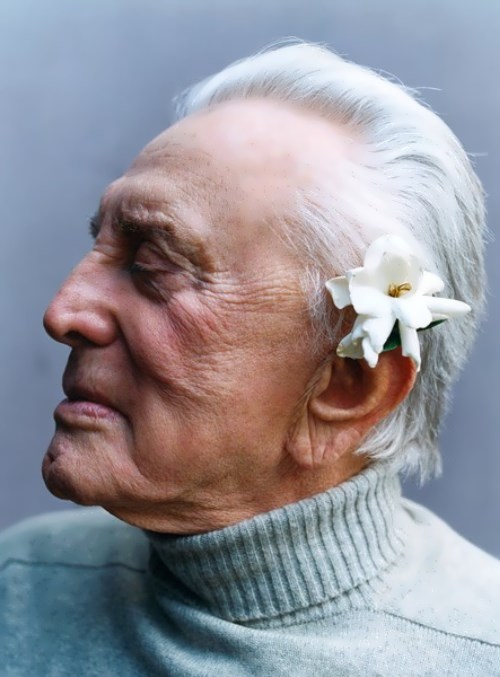