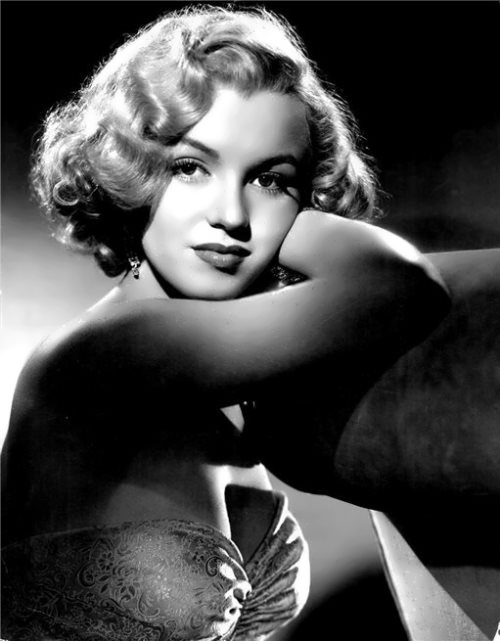 Marilyn Monroe was a huge sex symbol, and one of the 20th century’s biggest icons. During her film career she made 31 movies.
Norma Jean Baker (her real name) was born on June 1, 1926 in Los Angeles, California. She had an unhappy childhood in Los Angeles. Marilyn’s mother had psycho-logical problems and was eventually sent to a mental institution. Marilyn spent years moving in and out of orphanages and foster homes. It was in one of these foster homes at the age of nine that she was raped.
She got married on June 19, 1942 when she was only sixteen. Her husband, James Dougherty, joined the U.S. Merchant Marine in 1943. Marilyn took a job working at the Radio Plane Munitions Factory. It was there that photographer David Conover discovered her. By 1946, she’d already appeared on various magazine covers.

On August 26, 1946, she signed a contract with Twentieth Century Fox. Ben Lyon was the one who suggested a new name for the fledgling actress— Marilyn Monroe.
In 1948, she began her film career. In the spring of 1948 Columbia Pictures hired her for a small part in Ladies of the Chorus. In 1950 John Huston cast her in Asphalt Jungle, a tiny part which landed her a role in All About Eve.
In 1952, after an extensive publicity campaign, Monroe appeared in Don’t Bother to Knock, Full House, Clash by Night, We’re Not Married, Niagara, and Monkey Business. 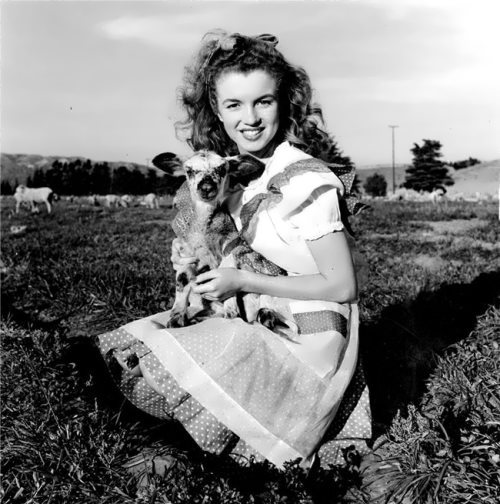 It was Marilyn’s performance in the 1953 movie Niagara that launched her career. The magazine Photoplay voted her Best New Actress of 1953 for her work in the film. She had lead roles in her next two films. Gentlemen Prefer Blondes and How To Marry A Millionaire, and she became an international star.
On January 14, 1954, she married Yankee baseball player Joe Di Maggio. But the couple divorced on October 27, 1954.
In 1955 she formed her own studio, Marilyn Monroe Productions.
She appeared in Bus Stop in 1956 and married playwright Arthur Miller on July 1, 1956.
Monroe won the Italian David di Donatello award for ‘‘best foreign actress of 1958,’’ and in 1959 she appeared in Some Like It Hot, which became her most popular film.
Her third husband, playwright Arthur Miller, wrote her last film, The Misfits (1961). The couple was divorced on January 24, 1961, and later that year Monroe entered a New York psychiatric clinic.
There are rumors that Marilyn had actually married four times. Apparently, before marrying Joe DiMaggio, Marilyn had been involved with journalist Bob Slatzer. The story is that in 1953 the two lovers eloped to Tijuana, Mexico. Fox Studios paid to have all evidence of the marriage burned – this was in the days when divorces, secret marriages and affairs could ruin a movie star’s career.
She is known as a sex symbol but, in fact, she was a great comic actress.
Marilyn Monroe was found dead in her Los Angeles bungalow on August 5, 1962. She died after taking sleeping pills. No one is sure whether it was an accident or suicide. There are even rumors that it was murder. Some believe that the Kennedys were involved. Marilyn had affairs with both Bobby and John Kennedy and the story was that she “knew too much”. Marilyn died at the age of 36. 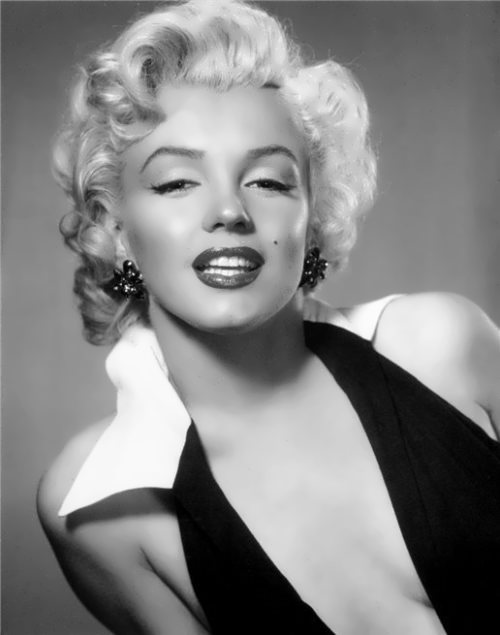 Interesting facts
– In May 1962, Marilyn sang Happy Birthday to President John F. Kennedy in public. The dress she was wearing at the time was recently sold for $1.2 million.
– Marilyn reportedly had affairs with the actor Robert Mitchum, Orson Welles (writer and director), Howard Hughes (the owner of RKO Studios) and Frank Sinatra. Apparently, Sinatra was about to propose marriage to Marilyn towards the end of her life, in order to “save her from herself”.
– Marilyn was known to be an animal lover.
– These days, Marilyn is seen as a sort of martyr for modern feminism.
– Elton John’s song, “Candle In The Wind” is all about Marilyn Monroe. Elton John sang a version of the song at Princess Diana’s funeral. 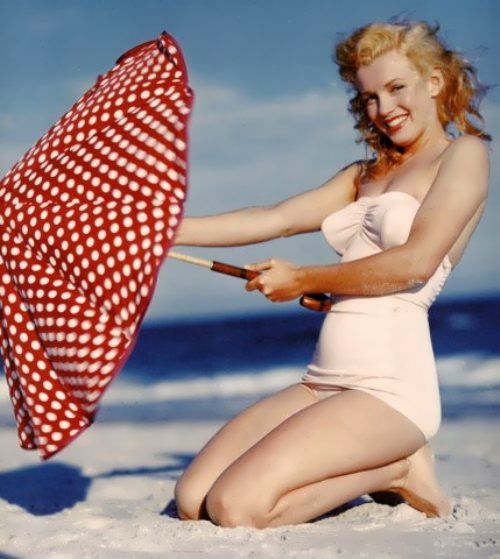 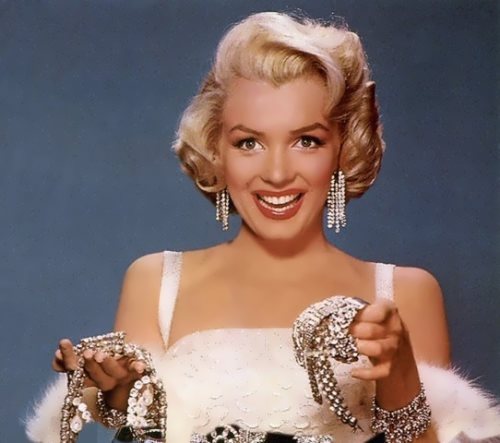 Marilyn – the most beautiful woman in the world 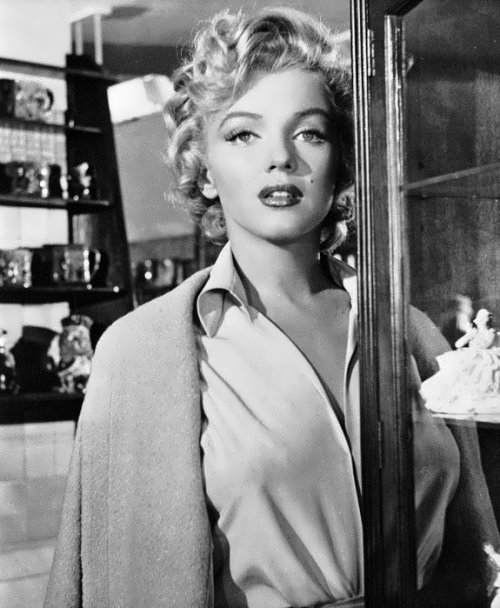 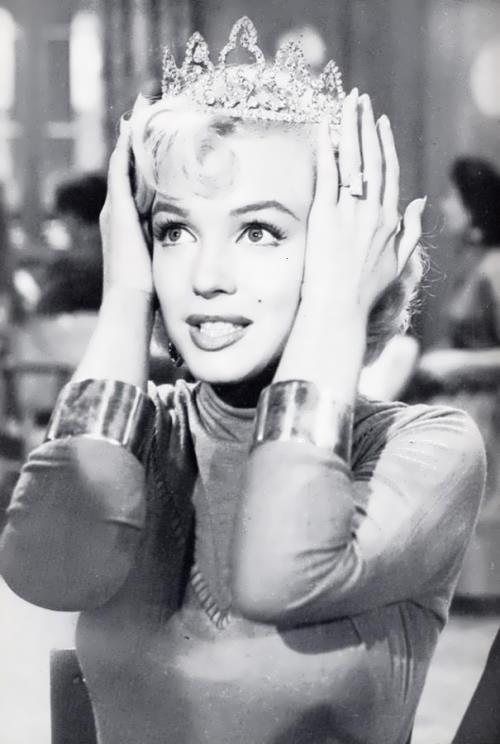 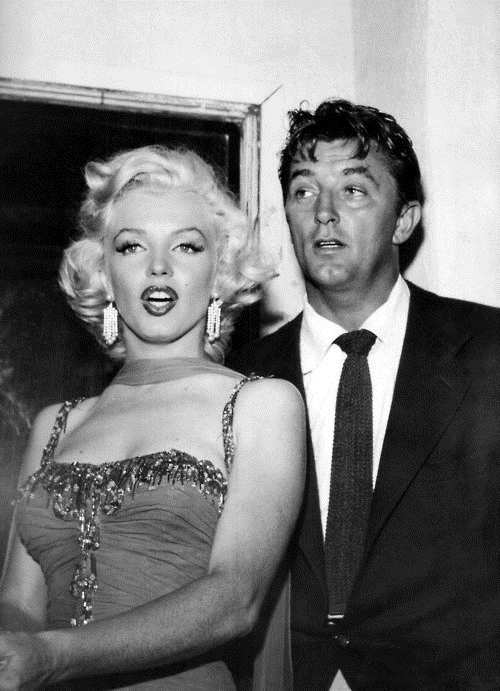 Monroe and Robert Mitchum. Dated in 1954 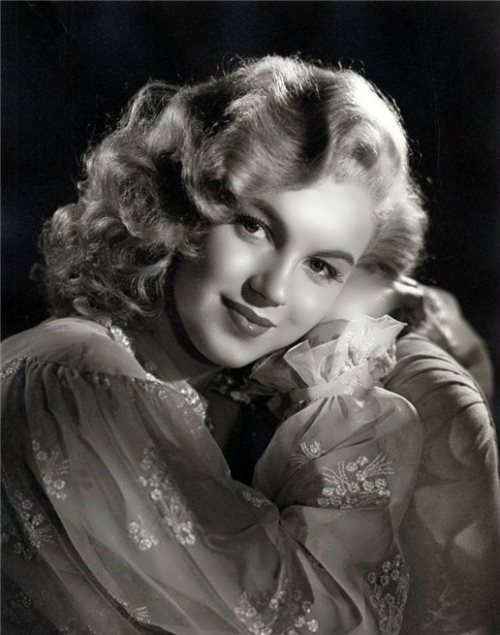 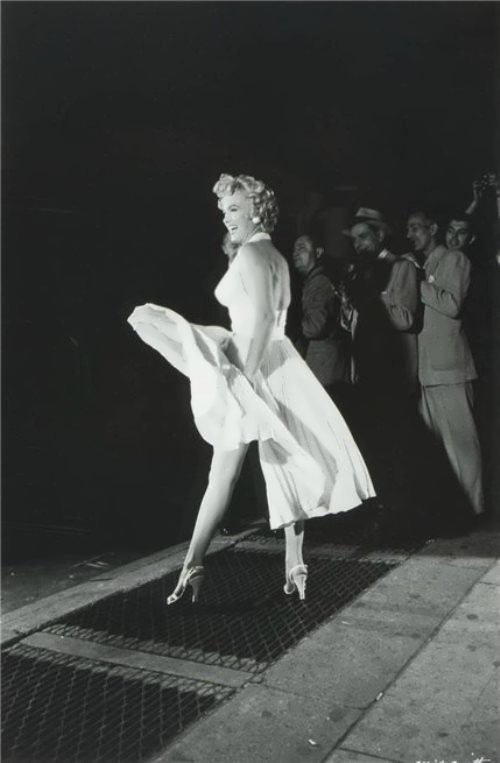 The most famous photo of Marilyn, 1955 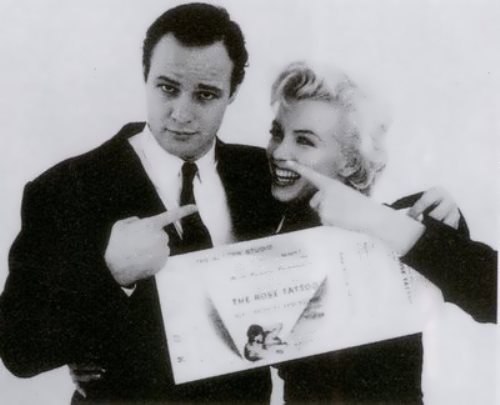 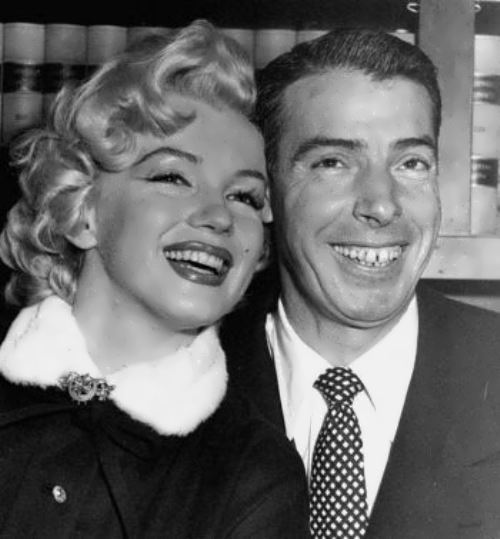 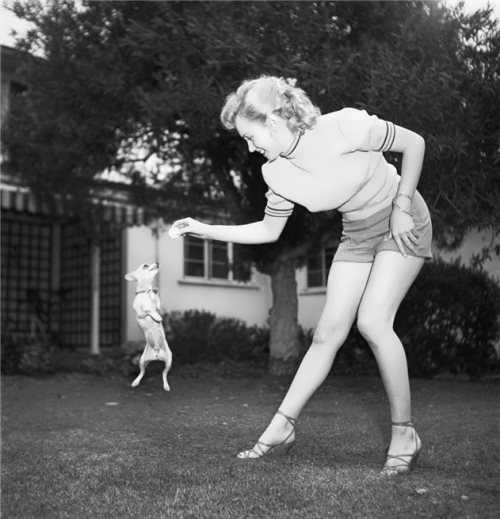 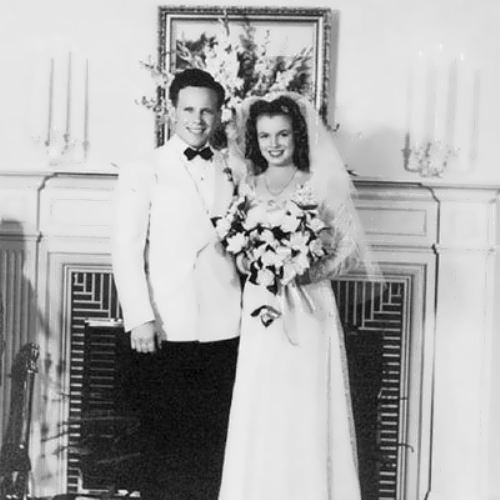 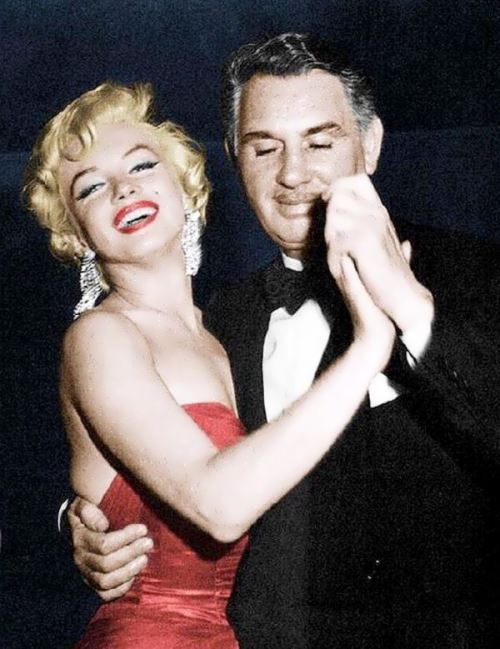 Monroe and Charles Feldman. Dated in 1941 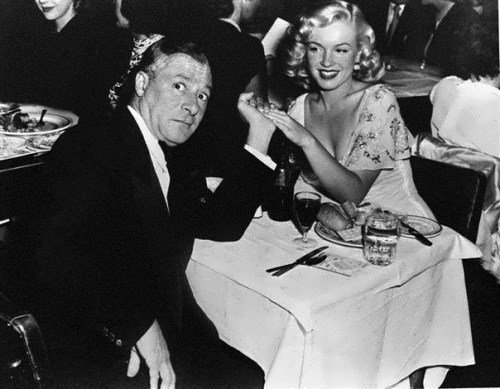 Monroe and George Jessel. Dated in 1948 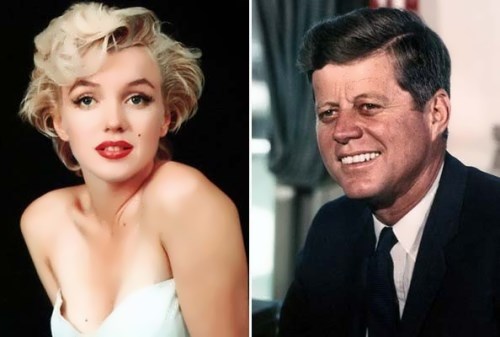 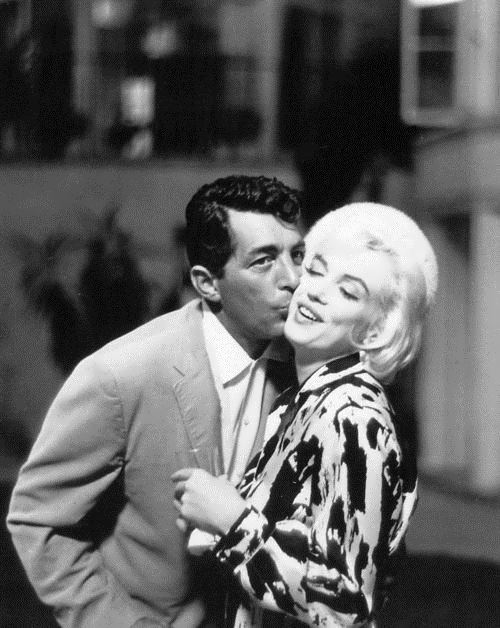 Monroe and Dean Martin. Dated in 1941 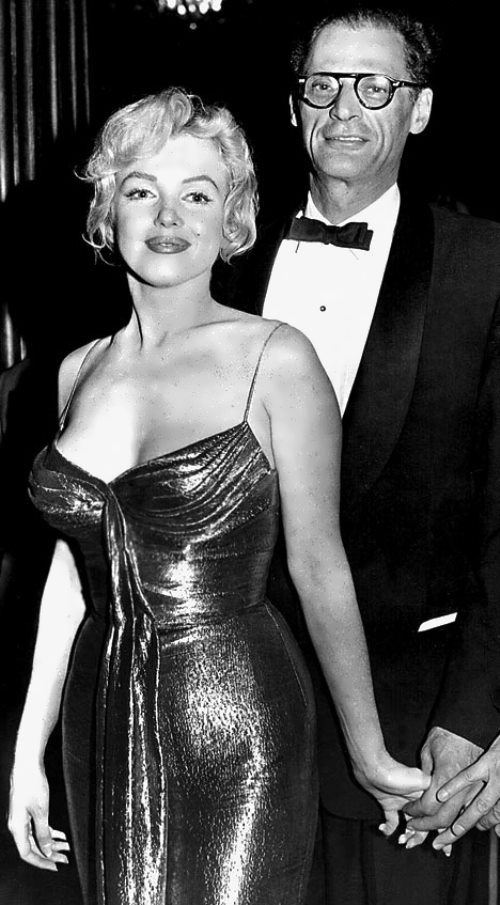 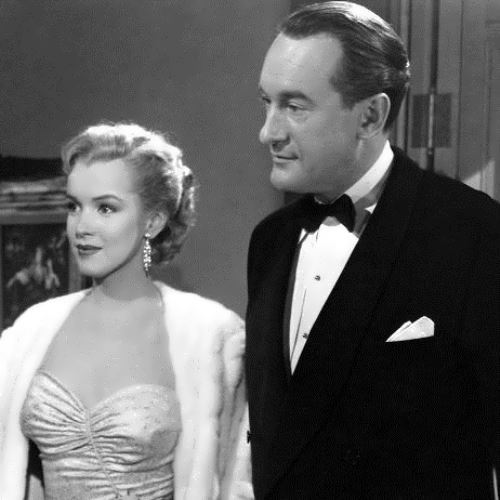 Monroe and George Sanders. Dated in 1950 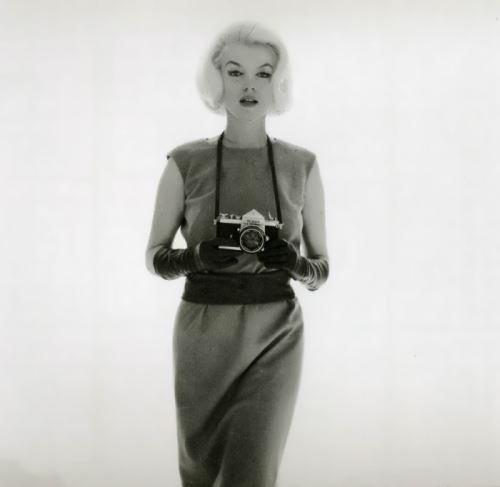