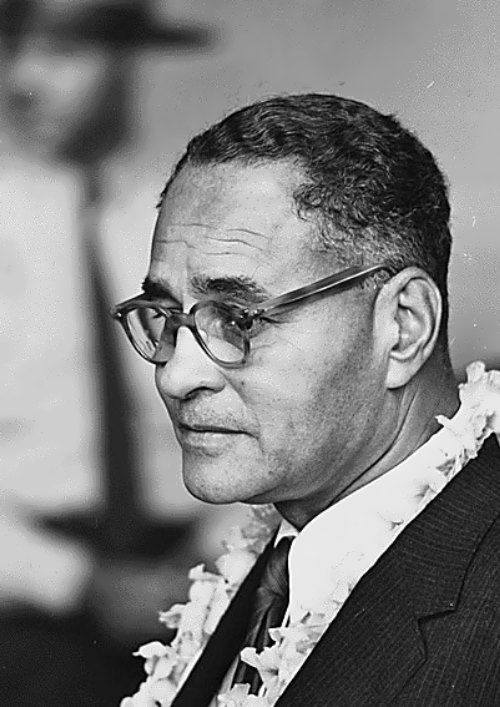 Ralph Bunche was a U.S. diplomat who won the Nobel peace prize in 1950. He became the first African American Nobel laureate. He was the highest American official in the United Nations.
Ralph Johnson Bunch was born on August 7, 1904, in Detroit, Michigan. His father was a barber and his mother was a musician. His parents died when he was 13 years old. His grandmother took Ralph and his young sister and moved to Los Angeles, California. As a schoolboy Ralph worked as a janitor, carpet-layer, and seaman.
Ralph was a good student and a good athlete. In 1934 he earned a doctorate in government and international relations at Harvard University. Later he taught at Howard University in Washington, D.C. From 1928 to 1942 Bunche was a member of the department of political science at Howard University.
In 1930 he married Ruth Harris, one of his students. They had three children.

In 1936 he was co-director of the Institute of Race Relations at Swarthmore College. From 1936 to 1938 he was engaged in anthropological research at the London School of Economics and Political Science, as well as the University of Cape Town.
He published A World View of Race and in 1944 together with the Swedish sociologist Gunnar Myrdal Bunche published his book An American Dilemma. Bunche was a member of the so-called “black cabinet” when Roosevelt’s administration dealt with issues of racial minorities.
Bunche helped to plan the United Nations (UN) during World War II. In 1949 Bunche helped Israel and several Arab nations to make a peace agreement. For this work he won the 1950 Nobel Prize for peace.
He also worked on the UN program for peaceful uses of atomic energy.
Bunche was one of the leaders of the National Association for the Advancement of Colored People (NAACP) for more than 20 years.
In 1963 President John F. Kennedy presented him with the Medal of Freedom. In 1965 he participated in marches in Selma and Montgomery, led by Martin Luther King, Jr., to protest racial discrimination.
In June 1971 Bunche retired from his post.
Bunche died on December 9, 1971, in New York City at the age of 68.