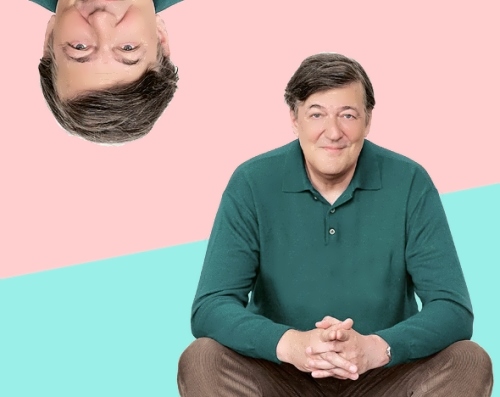 Stephen Fry is a comedian, successful novelist, star of the silver screen. He is the nation’s favourite teddy bear and the most beloved of all television personalities. Fry has spent more than two decades as one of British television’s favorite comic actors.
Stephen Fry was born on August 24, 1957 in Hampstead, London into a family of an English physicist and inventor Alan John Fry and his wife Marianne Eve Fry (née Newman).
At the age of 17 Stephen left College of West Anglia and ran away from home. He took a credit card of a family friend. He was arrested in Swindon and spent three months in jail.
Fry continued his studies at City College Norwich. Later he entered the famous Queens College, where he studied English literature. In addition to his studies, he took part in productions of students’ theater, where he met his friend and colleague Hugh Laurie.

His career in television began after honing his performance and writing skills in the Cambridge Footlights. Stephen teamed up with Hugh Laurie to appear on screens in four series of whimsical sketchery entitled A Bit of Fry & Laurie. Fry also became an unlikely TV star in the US in the crime drama Bones.
He has written several very well received books including The Liar, half an autobiography Moab is my Washpot and a scholarly but friendly guide to understanding and writing poetry entitled The Ode Less Travelled. In 2010 he released The Fry Chronicles: An Autobiography.
Fry got a prestigious Golden Globe nomination for his characterisation of Oscar Wilde. 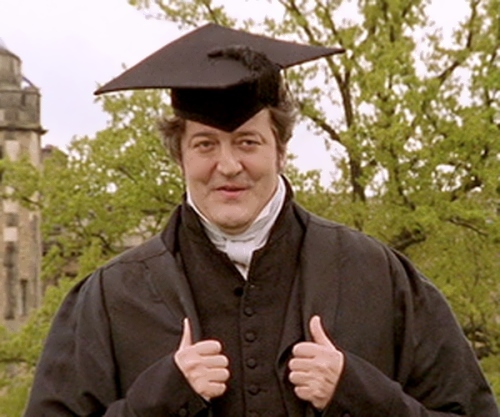 Stephen Fry in Cap and Gown

Interesting facts
– His full name is Stephen John Fry.
– Actor Hugh Laurie is Fry’s best friend. Fry is the godfather of three Laurie’s children.
– Stephen was a guest at the wedding of Prince Charles and Camilla Parker-Bowles.
– In 1984, Fry first achieved fame by writing an adapted version of Noel Gay’s musical Me and My Girl. The play was staged at Adelphi London theater.
– In 2003, the newspaper Observer named him among the 50 funniest people ever born in the world.
– In October 2008, Fry became Twitter user. On May 16, 2009 his page had 500 000 readers. Fry said: “Oh my god. 500 thousand readers. And I love you all. Except who is silly. And he’s not you.” In July 2015, Fry’s Twitter was read by more than 10.5 million people.

Personal life
From 1995 to 2010 he lived with his friend Daniel Cohen. In 2010, Stephen began dating actor Stephen Webb.
On January 6, 2015 it became known about the Fry’s upcoming marriage with his 27-year-old partner, stand-up comedian Elliot Spencer. 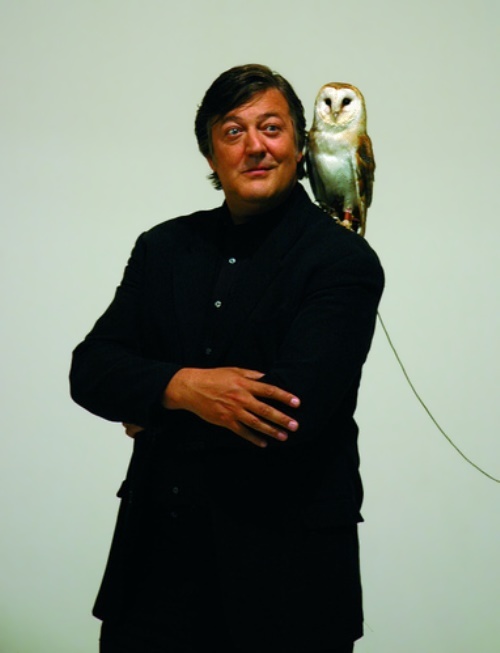 Stephen Fry Quotes
“I don’t watch television, I think it destroys the art of talking about oneself”

“I don’t need you to remind me of my age. I have a bladder to do that for me.”

“Having a great intellect is no path to being happy.”

“I shouldn’t be saying this high treason, really – but I sometimes wonder if Americans aren’t fooled by our accent into detecting brilliance that may not really be there.”

“It is a clich that most cliches are true, but then like most cliches, that cliche Is untrue.”

“It’s rather splendid lo think of all those great men and women who appear to have presented symptoms that allow us to describe them as bipolar. Whether it’s Hemingway. Van Gogh.. Robert Schumann has been mentioned… Virginia Woolf, Sylvia Plath… some of them with rather grim ends.” 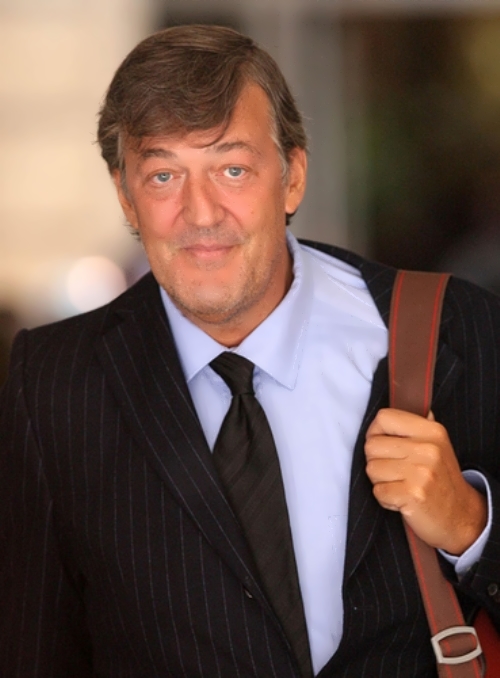 “To be human and to be adult means constantly to be in the grip of opposing emotions, to have daily to reconcile apparently conflicting tensions. I want this, but need that I cherish this, but I adore its opposite too. I’m maddened by this institution yet I prize it above all others.”

“I am a lover of truth, a worshipper of freedom, a celebrant at the altar of language and purity and tolerance. That is my religion, and every day I am sorely grossly, heinously and deeply offended, wounded, mortified and injured by a thousand different blasphemies against it. When the fundamental canons” of truth, honesty, compassion and decency are hourly assaulted by fatuous bishops, pompous, Illiberal and ignorant priests, politicians and prelates, sanctimonious censors, self-appointed moralists and busy-bodies, what recourse of ancient laws have I? None whatever. Nor would I ask for any. For unlike these blistering Imbeciles my belief in my religion is strong and I know that lies will always fail and indecency and intolerance will always perish” 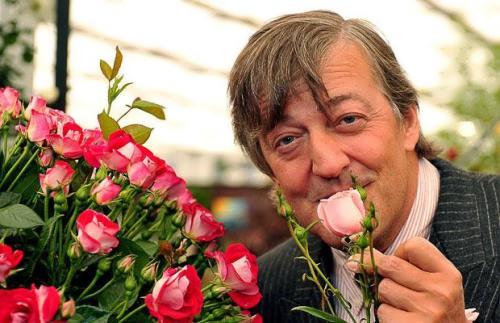