Viktor Schauberger was a genius, self-taught scientist who tried to unravel the secrets of nature. He knew how to purify water in a natural way and use its power for the benefit of man – as the ancients did.
Viktor Schauberger was born in 1885 in the Austrian outback. He was the fifth of nine children in the family of hereditary foresters and grew up a real son of the forest. As a child, he and his father spent days in the forest. Viktor was in love with the forest. When his father decided to send his son to the university to study forestry, Viktor refused, sincerely believing that the best teacher was the forest itself. Teachers, he thought, would distort his unbiased vision of nature, as happened with his brother. Viktor chose a regular school and learned to be a forester.

After graduation, Schauberger was given 20,000 hectares of almost untouched forest belonging to Prince Adolf von Schaumburg-Lippe. Schauberger immediately fell in love with the virgin beauty of this forest. Viktor was interested in the water. The result of his observations was an unexpected discovery: the water does not like sunlight. The spring existed in the forest for a long time and an old stone house stood over it. When the house collapsed, the spring was exposed to direct sunlight. A little time passed and the spring dried up. But when a new hut was built over it, the water returned. Even the ancient Romans knew that the water was afraid of the sun, and always covered the springs with stone slabs. The second discovery was no less amazing: the water likes a shadow. It’s no accident that all the springs hide in a dense forest or in deep clefts of rocks.
Schauberger wondered: how did trout and salmon manage to freeze motionless in the most violent streams or jump high above the water? The answer to this question he received through tens of years of intensive observations. It depends on the temperature of the water. The lower it is the more “flying” abilities of fish. Any force creates an equal opposing force. The current produces energy directed towards the flow. This energy flow is used by trout. When Schauberger unraveled the nature of this phenomenon, it became clear to him why large heavy stones rose at a cold winter night from the bottom of the pond.
Europe learned about uncommon abilities of a simple forester by chance. Because of financial difficulties, Prince Adolf von Schaumburg-Lippe decided to sell part of the forest, but transportation from a remote area consumed most of the proceeds. Engineers offered different ways of transportation, and suddenly a forester appeared with an unusual idea: to raft the forest along a mountain stream, which would reduce transportation costs. Wanting to prove his case, Schauberger used his own money to build a floating device. The floating tray stretched for 50 km and repeated the shape of the stream. From time to time the forester drained water from the tray and brought fresh from the mountain streams. He knew: he knew: under the sun, the water becomes tired and lazy, while at night and especially in the moonlight it is fresh and alive. Schauberger chose the moment when the water was the coldest, and flooded the felled trees. For one night all the rafting forest was lowered into the valley. The admired prince made Schauberger the chief.
In the late 1920s, Schauberger began to fight against deforestation.
During the war, he developed new types of drive engines for rockets.
At the end of his life, Schauberger’s position was depressing. Authorities destroyed his drawings and schemes.
On September 25, 1958, Schauberger died at the age of 73. 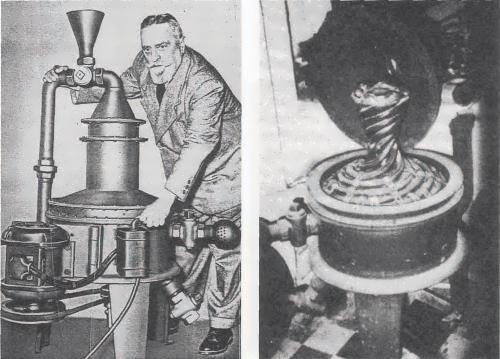