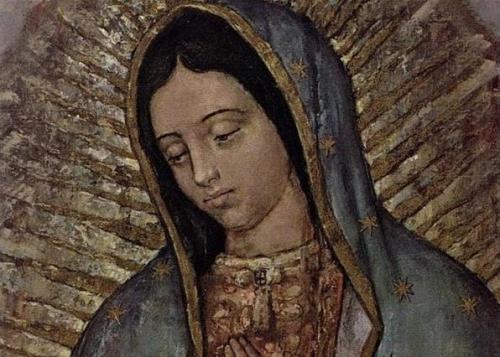 Virgin Mary of Guadalupe is the most revered shrine of Latin America. Every year, about 14 million people come to the top of Tepeyac Hill (north of modern Mexico City) to worship the image of the Virgin. According to local beliefs, you need to come here on foot, with the last 100 meters with prayer and on your knees. Most believers come there from December 9 to 12, when all of Mexico celebrates St. Mary’s Day.
According to legend, the Virgin Mary stopped the deadly epidemic in Mexico City, which was raging in 1736-1737. In this regard, on April 27, 1737, Pope Clement XII declared the Virgin of Guadalupe the patroness of Mexico City. On May 25, 1754, Pope Benedict XIV proclaimed her the patroness and protector of New Spain, August 24, 1910 Pius X – patroness of all of Latin America, and July 16, 1935 Pius XI – patroness of the Philippines.
On January 22, 1999, Pope John Paul II proclaimed her “the patron saint of all the people of America and the star of evangelism.” Virgin of Guadalupe is the patroness and protector of unborn children. Her image is often used by pro-abortion advocates.

The image of the Virgin of Guadalupe turned out to be extremely attractive not only for believers and clergy, but also for scientists. The first thorough scientific study of the image was carried out in 1666 (!). It was conducted by artists, physicians and historians of Aztec culture. They collected memories and testimonies of the oldest inhabitants of Mexico City and its environs. In 1751-1752, the image of the Virgin of Guadalupe was studied by a commission of artists, which as a result published a book-report American Marvel (1756). But the most amazing discoveries followed in the 20th century, especially after the advent of computers and digital methods of information processing.
In 1946, it was found that the canvas with the image is woven from a plant of the genus agave. In 1975, Mexican biochemists, Dr. Ernesto Pallares and Dr. Roberto Palacios, specified the type of agave – Agave popotule. Material from this agave is short-lived and lasts no more than 20-30 years. However, the image is already five hundred years old, and it is almost like new! 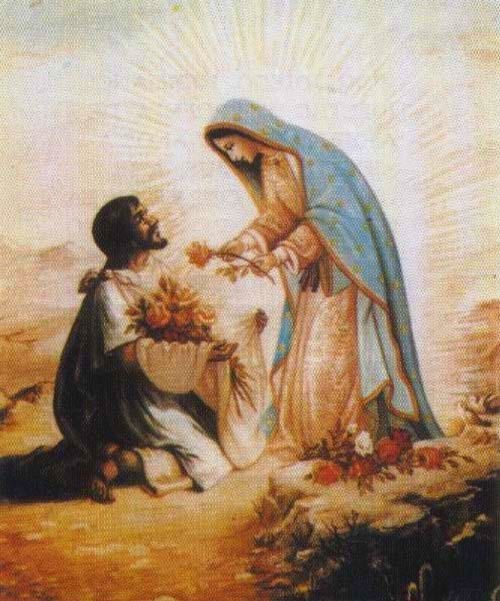 But the most incredible thing is connected with the eyes of the Mother of God. The eyes of the Virgin of Guadalupe look like the eyes of a living person. The rapid development of science and technology made it possible to see what was hidden from people for hundreds of years and, possibly, was intended for us, now living on this planet, and future generations. In 1929, the photographer Alfonso Marche, studying negatives, found in the right eye of the Virgin the image of a man. A quarter of a century later, a team of specialists presented new data that excited the scientific community. It turned out that in the eyes of the image of the Virgin Mary there is a triple reflection.
Peruvian scientist Jose Aste Tonsmann, a doctor of computer science, increased the size of the pupils. So, he managed to discover something amazing. Studying the images arranged by computer, Tonsmann identified 12 figures that were imprinted in the eyes of the Virgin Mary five hundred years ago. 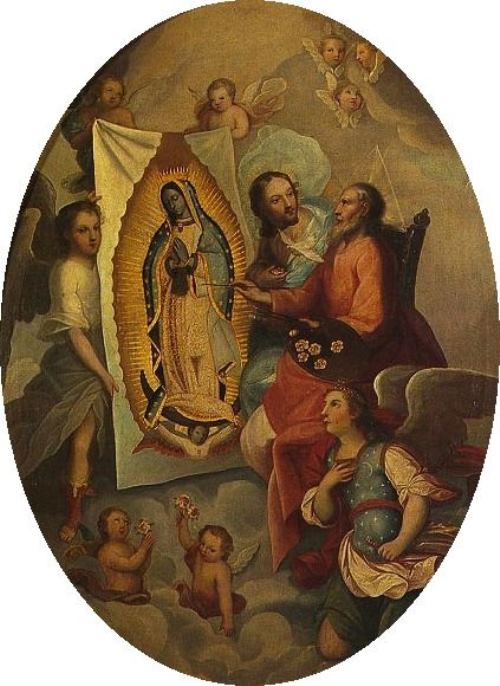 Here is a legend.
According to Nicon Mopohua (a book written in the middle of the 16th century in Nahuatl – the Aztec language), the Mother of God appeared four times to a certain Juan Diego Cuauhtlatoatzin in the period from December 9 to December 12, 1531. For the first time she appeared in the morning of December 9 near the ruins of the pagan temple of the local goddess on Tepeyak Hill. Suddenly a bright light flashed, and in front of the amazed Indians a beautiful dark-skinned girl appeared in shiny clothes. The girl spoke to him in the Nahuatl language, called herself the Virgin Mary, the Mother of the true God, and ordered the Christian priest to convey her desire to build a temple in this place.
Franciscan Bishop Juan de Zumarraga reacted to the story of the Indian with distrust. The Virgin Mary appeared to the peasant again and repeated her request, emphasizing that this was the desire of the Mother of the Lord. The bishop, in turn, demanded evidence.

Returning home, Juan Diego for the third time saw the Virgin and was ordered to appear on the hill the next morning to receive a sign from above. Early in the morning of December 12, Juan left his house; however, he did not go up the hill, but after the priest for his dying uncle. But the Virgin appeared in his way. She gave him the good news that his uncle had recovered and sent him up the hill for evidence for the bishop. The barren hilltop on the cold December morning was scarlet because of blooming roses. Virgin Mary helped Juan Diego wrap roses in his cloak. When the Indian unwrapped the cloak the roses fell at the feet of the bishop and all those present knelt down. The face of the beautiful Virgin looked at them from the coarse fabric of the cloak.
The next day, Juan Diego showed the bishop the place where the Virgin wanted them to build a temple. So, the temple dedicated to the Virgin of Guadalupe was built. In just six years, eight million people have been baptized – almost the entire population of then Mexico. It was a real miracle. In Europe, for example, the spread of the Christian faith took more than one hundred years.
You know, the Catholic Church celebrates Memorial Day for Juan Diego on May 30th.
In January 2013, in the city of Oruro (Bolivia), giant statue of the Virgin Mary was opened. 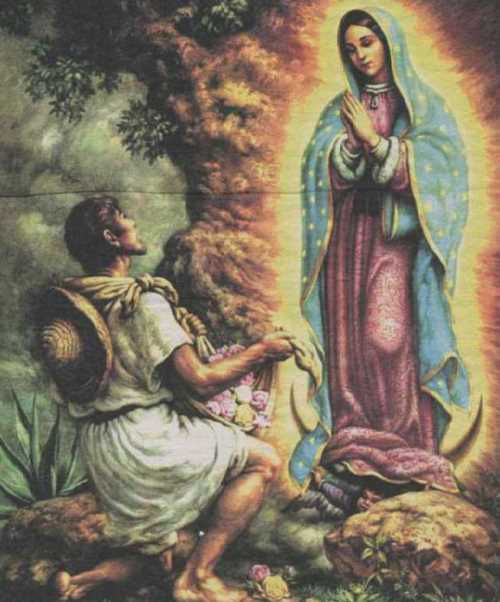 The Apparition of the Virgin Mary to Juan Diego

For the indigenous people of Mexico, especially for the Aztecs, the appearance of the Virgin was a real salvation, it gave them hope for a better future. And the time was really difficult: the state was crushed, the capital was destroyed, the supreme ruler was taken prisoner and killed, on the site of the temples there were only ruins. And then a ray of light appeared in the realm of darkness and hopelessness. Indeed, the appearance of the Virgin in December 1531 turned out to be very timely and helped the peoples of America to move relatively easily to a new round of civilization. 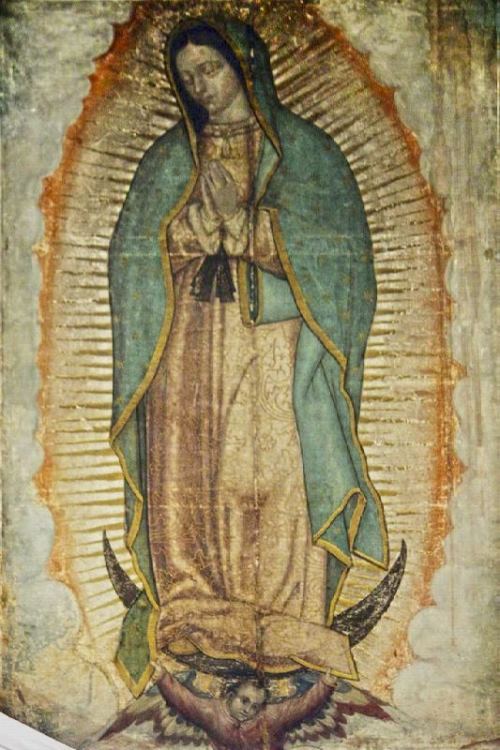 Icon of the Virgin of Guadalupe in the Church of Our Lady of Guadalupe, Mexico City, Mexico 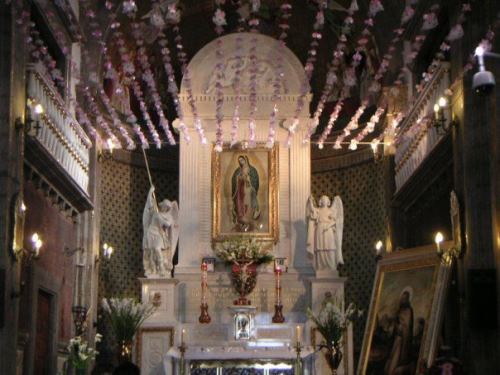 The image of the Virgin of Guadalupe in the basilica