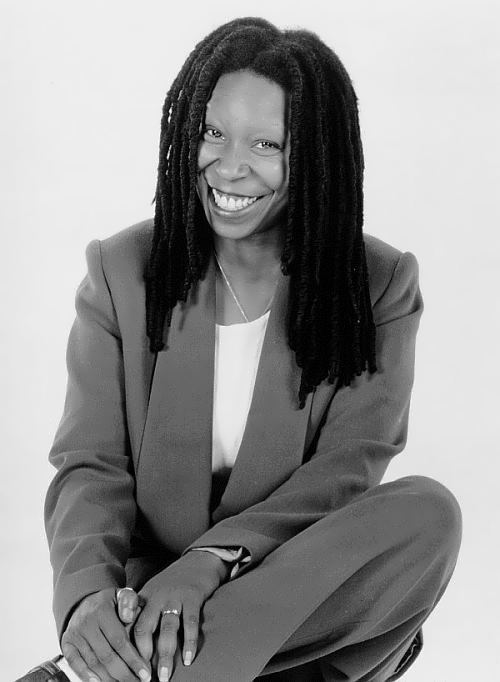 Whoopi Goldberg is an American film and stage actress, producer, writer, TV presenter, UNICEF Goodwill Ambassador. She is one of the few celebrities who were awarded four major US prestigious awards – Oscar, Grammy, Emmy and Tony. She also received two Golden Globe awards, BAFTA and a Star on the Walk of Fame. Whoopi is one of the brightest Hollywood stars of 1980-1990-ies.
Caryn Elaine Johnson (her real name) was born on November 13, 1955 in Manhattan, New York. Her mother worked as a nurse and teacher, and her father was a priest.
At the age of eight Caryn began performing in the Helen Rubenstein experimental children’s theater. The girl had to left school due to dyslexia.
In the late 1960s, Caryn joined the hippie movement. She left home to live in a commune where she addicted to marijuana, and later – to the heavier drugs. The girl didn’t work for a long time. She tried to get rid of the addiction but it was very difficult.

In early 1970 she met Alvin Martin, activist of the organization Against Drugs. Alvin convinced her to change her life. Soon they got married and a year later Caryn gave birth to their daughter Alexandra.
Caryn worked as a night watchwoman, a makeup artist in a morgue, bricklayer, until finally, in 1974 she managed to find an acting job in the new theater in San Diego. Alvin refused to leave New York, and they had to split up.
Caryn began her career in theater under the name Whoopi Goldberg. In San Diego, she participated in the creation of the City Theatre, then she moved to San Francisco. She played in several amateur troupes. 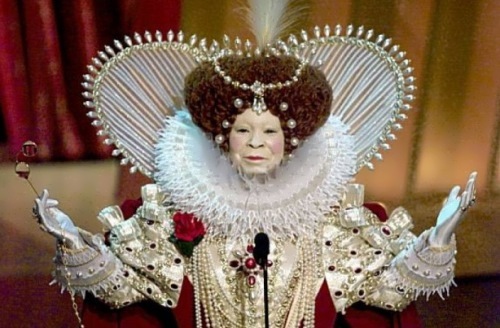 The main role in the play Mother Courage became one of her first roles.
In 1983 she staged one-man show Spook Show. With this show Whoopi toured not only in America but also in Canada and Europe. The performance was seen by director Mike Nichols, who in 1984 helped Whoopi to organize performance on Broadway. Here, she was invited to a number of productions, in particular, the actress took part in the musical Jesus Christ – Superstar.
In 1985 Whoopi played the main role of Celia Johnson in the adaptation of Alice Walker’s epic novel The Color Purple.
For the bright film debut Whoopi was awarded Golden Globe and nominated for Oscar.
In the mid-1980s, Goldberg became one of the most recognizable faces in the entertainment industry.
In 1991, Goldberg received the Oscar award, the Golden Globe and the BAFTA for the role of Oda Mae Brown in the movie Ghost. 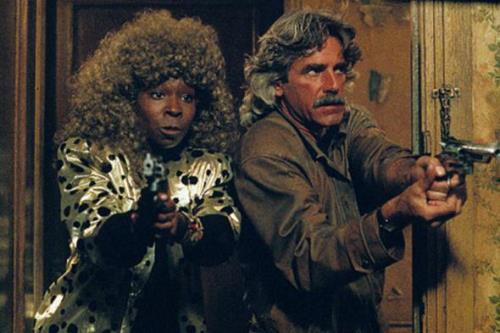 Whoopi starred in a music video of Michael Jackson’s song Liberian Girl.
In 1994, Goldberg made her debut as a presenter of Oscar award ceremony.
Beginning in 1986, Goldberg hosted, along with Billy Crystal and Robin Williams, the annual Comic Relief benefit that raises money for the homeless through the Health Care for the Homeless project. Goldberg also campaigns on behalf of environmental causes, the nation’s hungry, AIDS and drug abuse awareness, and women’s right to free choice. She has been recognized with several humanitarian awards for her efforts. 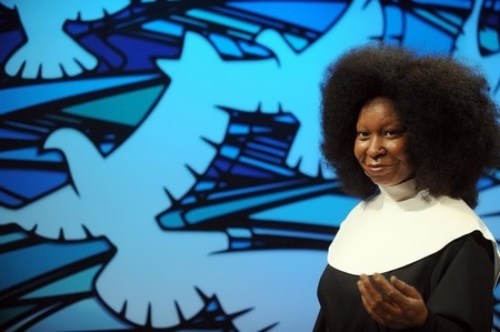 Personal life
Whoopi Goldberg was married three times. Alvin Martin, photographer David Cassin and a businessman Michael Trachtenberg were her husbands.
They say she had love affairs with Frank Langella, Ted Danson, Timothy Dalton, and Eddie Gold.
At the age of 34 the actress became a grandmother for the first time, when her 16-year-old daughter gave birth to a girl. Whoopi has three grandchildren. 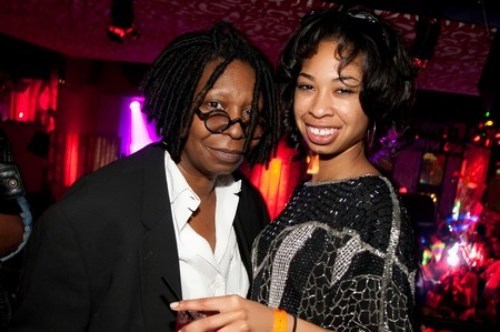 Whoopi and her daughter 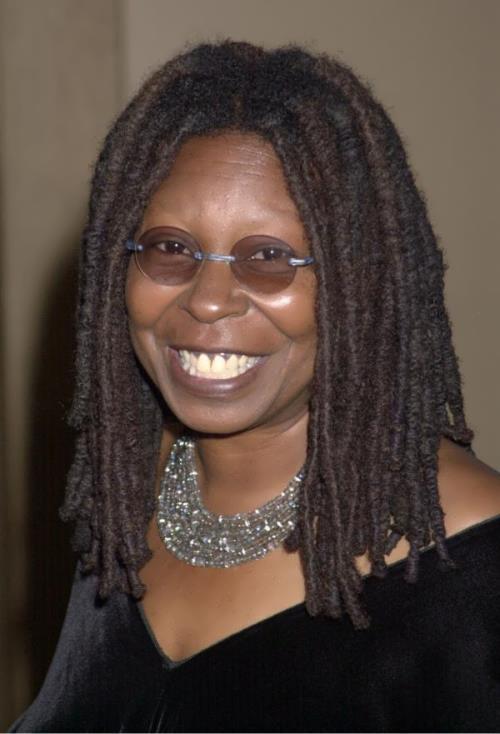 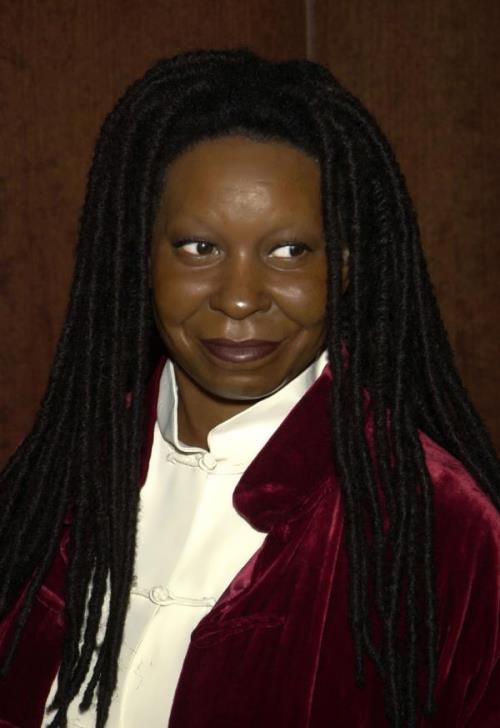 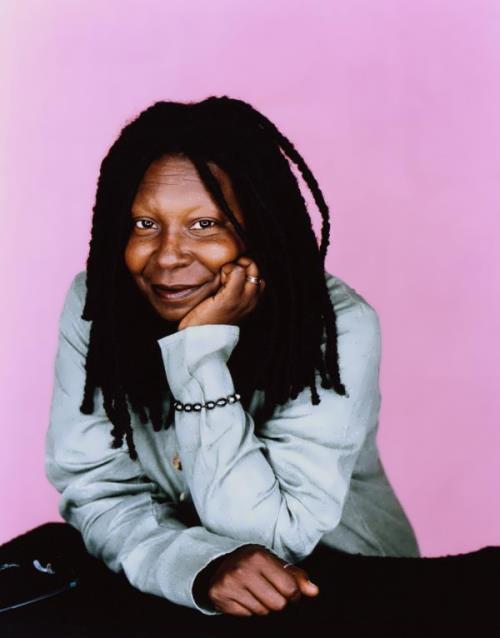 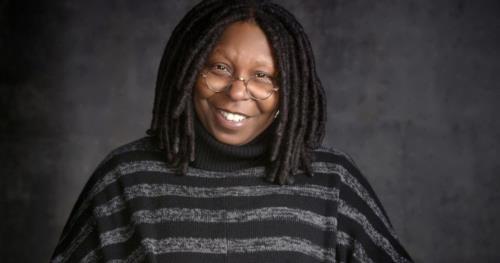 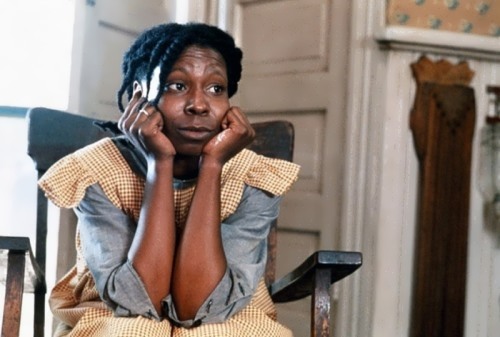 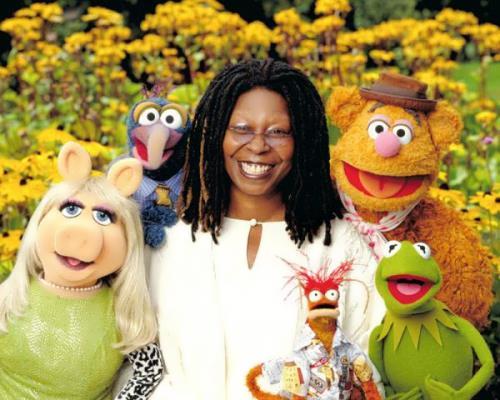 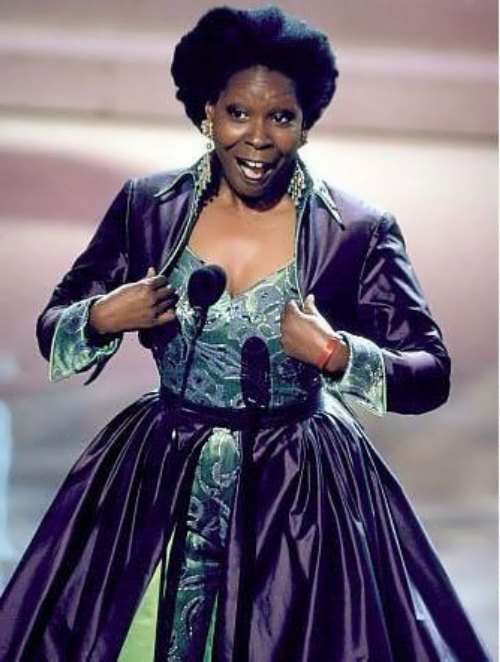 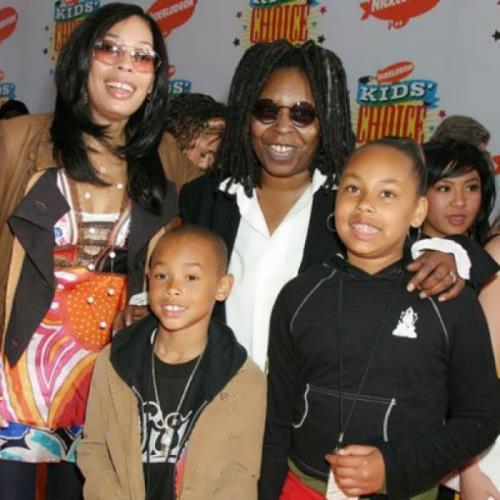 Whoopi and her family 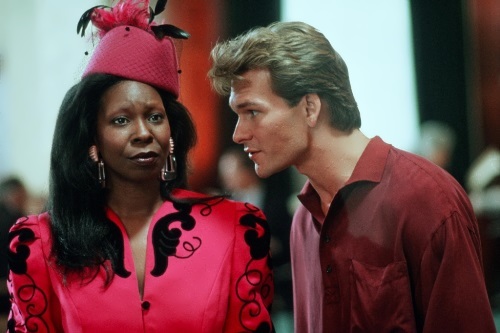 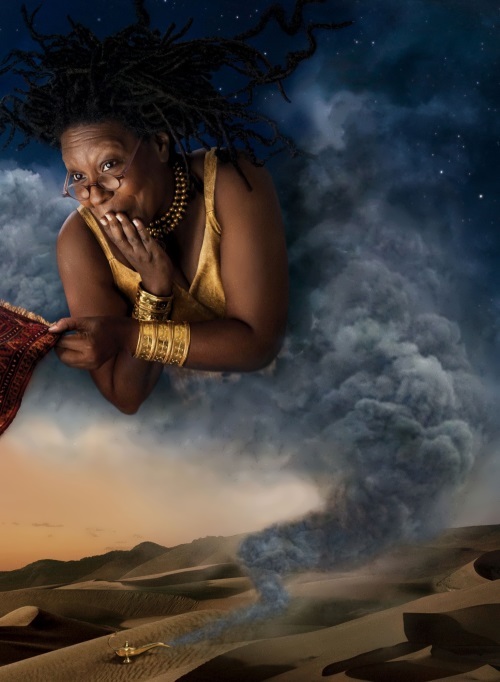 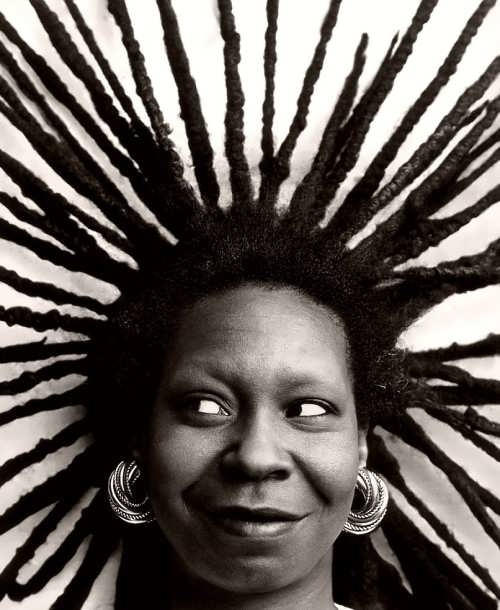 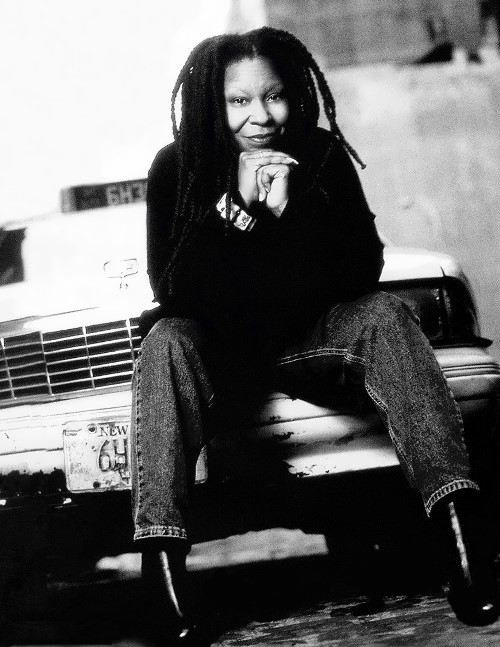 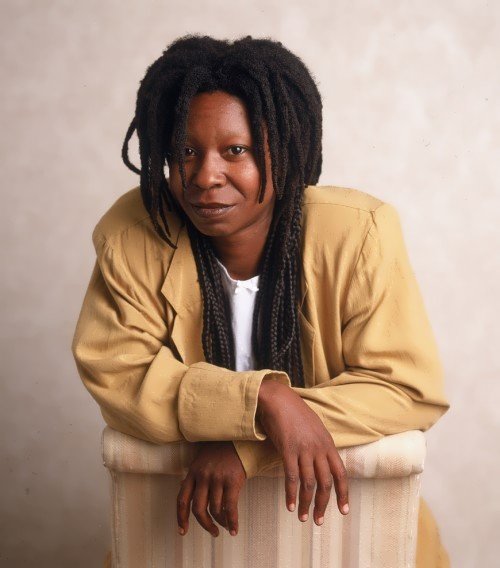 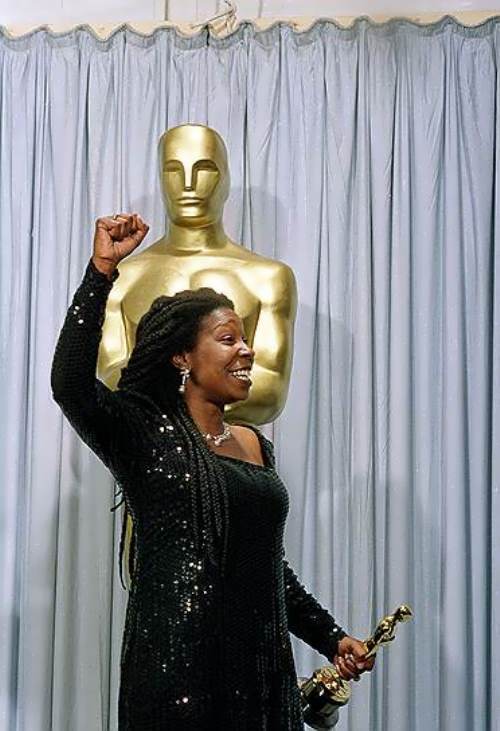 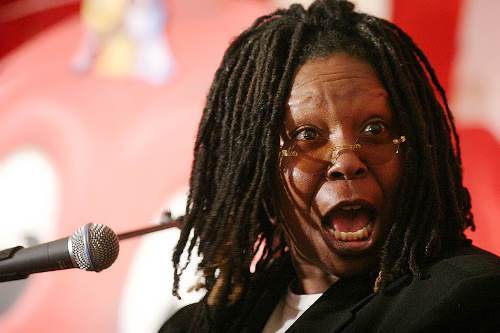 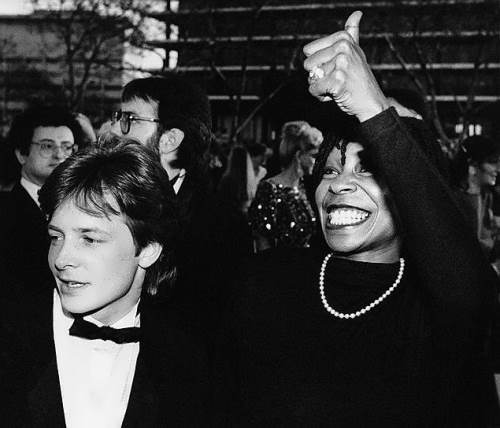 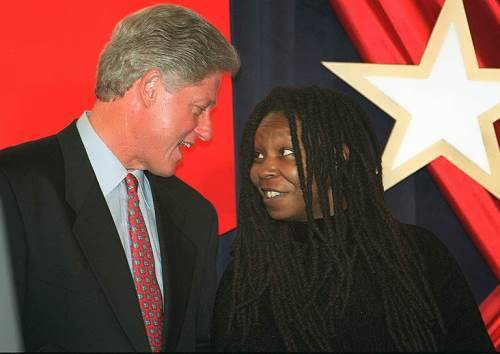 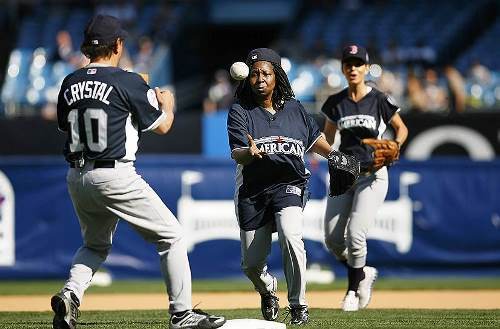 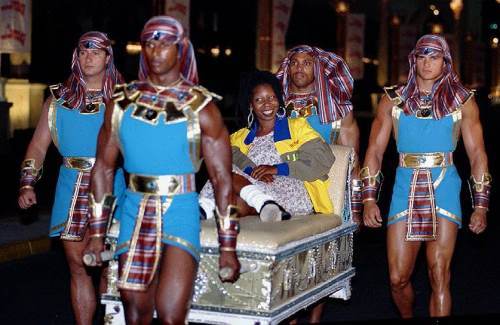 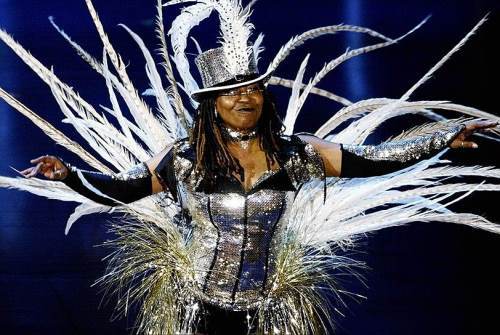 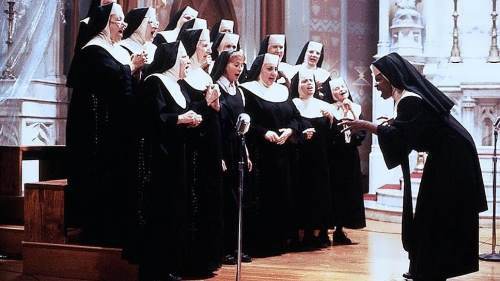 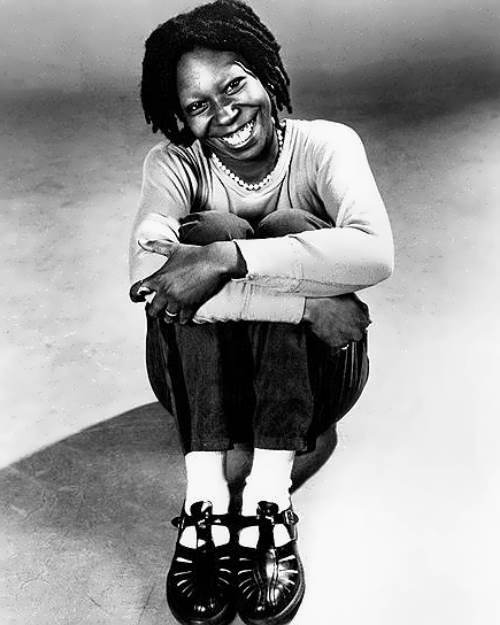