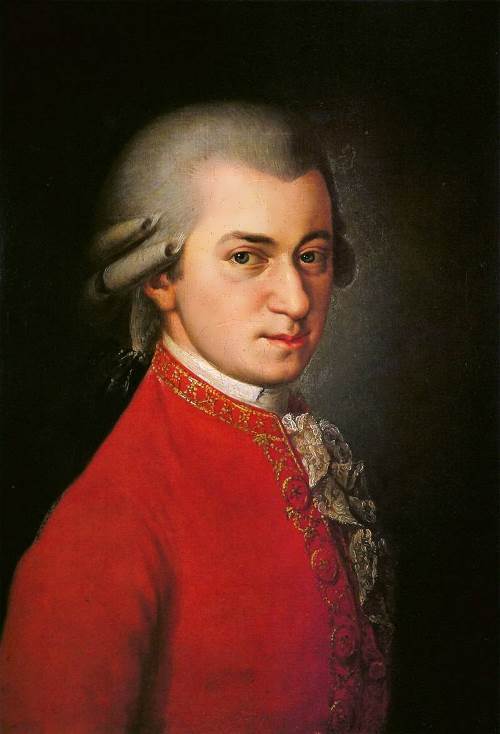 Wolfgang Amadeus Mozart was an Austrian composer and virtuoso musician. One of the most popular classical composers, Mozart had a great influence on the world musical culture. According to contemporaries, Mozart had a phenomenal ear for music, memory and ability to improvise. Many of his works are considered masterpieces of symphonic, concert, chamber, operatic, and choral music. In all, Mozart wrote over 600 pieces of music. Some of his most famous works include the operas The Marriage of Figaro, Don Giovanni, and The Magic Flute and the Jupiter Symphony.
Mozart was born on January 27, 1756 in Salzburg, Austria. His full name was Johann Chrysostom Wolfgang Amadeus Mozart. At the age of only three Wolfgang started to play the piano. His father, Leopold, was a musician. He taught Wolfgang and his sister to play musical instruments. Wolfgang remembered the music after hearing it just once! 5-year-old Wolfgang wrote his first piece of music for the piano and began earning money at the age of six. He played for kings and queens and other important people. Mozart played the violin, organ, piano, and harpsichord. 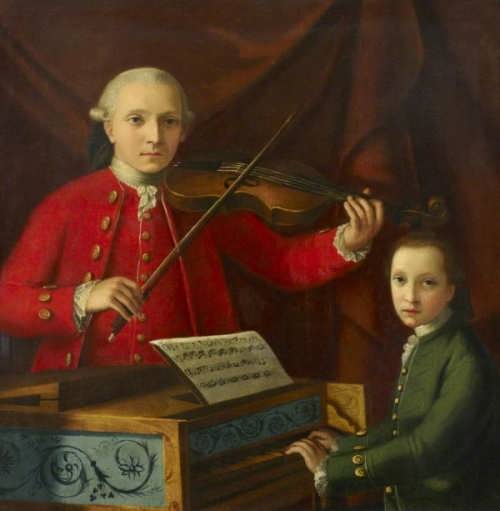 At the age of eight he wrote his first symphony and at the age of eleven – his first opera. Mozart was called the ‘wonder child’. Stories about the little geniuses were more like a legend. Young composer gave concerts in Vienna, Paris, London, travelled to Italy, Holland, Belgium.
Mozart fell in love with his landlady’s daughter. She did not love him, so he married her sister, Constanze. The Mozarts had six children, but only two lived to be adults.
He was successful as a pianist and composer, but he had financial problems for much of his life.
In 1791 Wolfgang began working on a mass for the dead, called a requiem, but he died before completing it.
Mozart died on December 5, 1791 in Vienna. He was only 35 years old. Wolfgang was buried as a poor person in a grave with no name. 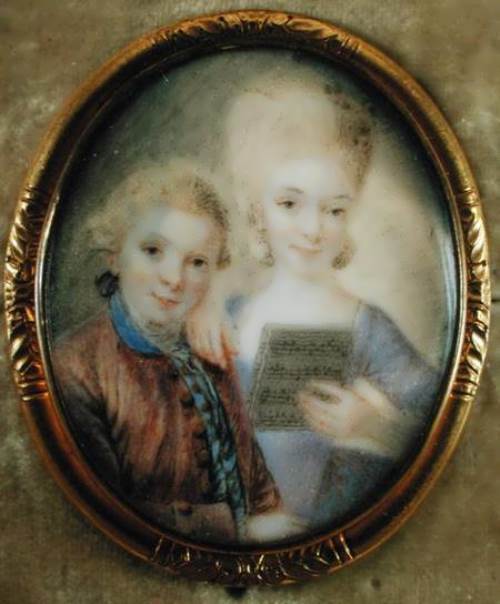 Discussion on the causes of Mozart’s death began soon after his death. Within three weeks there was a version of his poisoning. On December 31, 1791 Berlin Music Weekly suggested that Mozart had been poisoned. But who poisoned him?
English explorer Francis Carr has devoted an entire book to this problem. And in his opinion, the poison, that killed Mozart, was a mixture of gray arsenic, lead oxide and silver antimony. It was a traditional poison of XVIII century, because it was believed that this poison cannot be detected, and it effected a few months after entering the body. It should be noted that this poison was given to Napoleon.
At least three people could give the poison to the great musician. The first was composer Antonio Salieri. The reason for the murder was envy.
Franz Xaver Süssmayr, the closest student of Mozart, is the second suspect. He was the lover of the composer’s wife, Constanza. 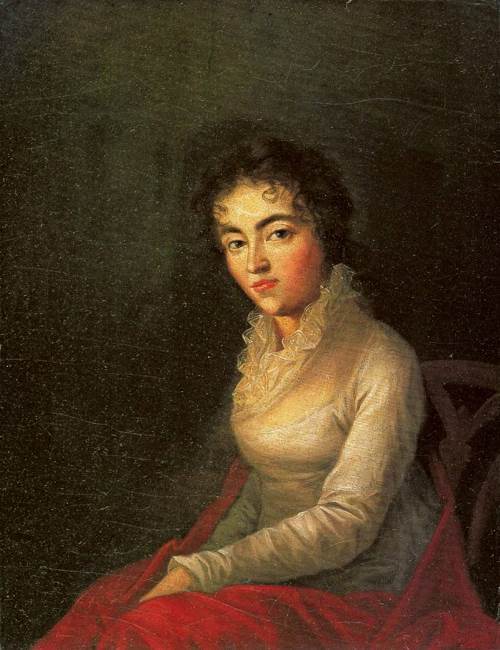 Another candidate is Franz Hofdemel, lawyer and husband of Magdalena, probable lover of Mozart.
But why was Salieri the main culprit of composer’s death? In the fall of 1823, Salieri tried to cut his throat with a razor, and before that, he announced that he poisoned Mozart. Probably he was a mentally ill person.
In 1991, an English pharmacist said that medicines killed the composer. He suffered from malarial fever and melancholy. The diseases were treated with a mixture of antimony and mercury. The use of antimony produces very unpleasant side effect – it causes a disease similar to pneumonia, and can easily lead to death.
The debate is not yet over. 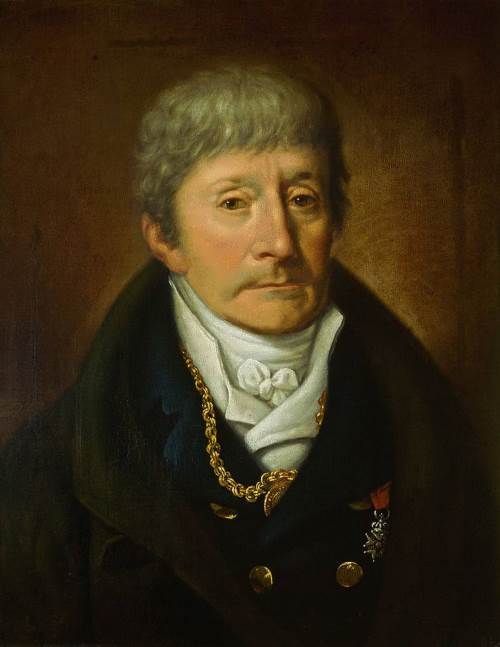 Salieri wrote 45 operas which were highly acclaimed throughout Europe in the 18th century. His Tarare, written in 1787, was more popular in Vienna than Mozart’s Don Giovanni, which came out at the same time.
The rumour that Salieri poisoned Mozart originated by the opera singer Callisto Bassi, who gave it as the reason for Mozart’s mysterious death aged 35. Alexander Pushkin gave the rumor credibility in his play Mozart and Salieri, written in 1830, five years after Salieri’s death. This became the basis of Nikolay Rimski-Korsakov’s 1898 opera of the same name.
The film of Schaffer’s Amadeus, with F. Murray Abraham’s celebrated portrayal of Salieri as an embittered sociopath, brought the story of Mozart’s “murder” to a new generation of Salieri-haters.
“Poor Salieri” has only been remembered “for a crime it turns out he did not commit”. 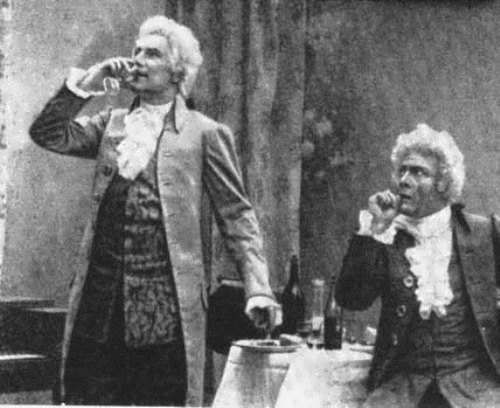 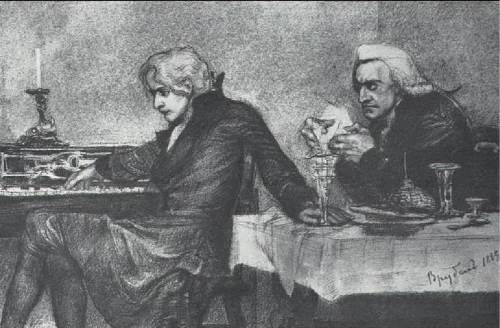 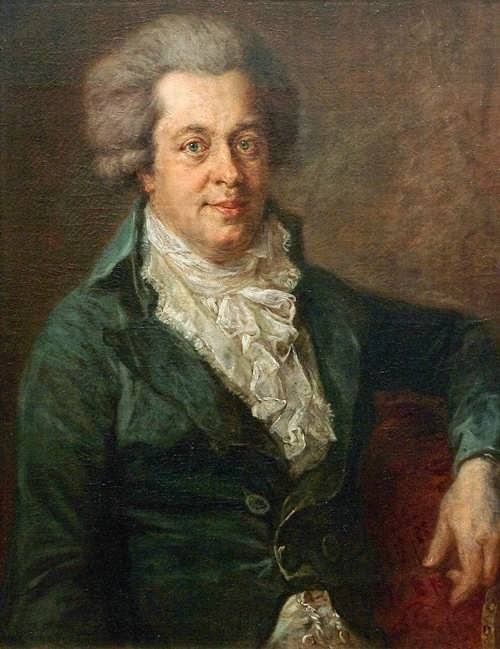 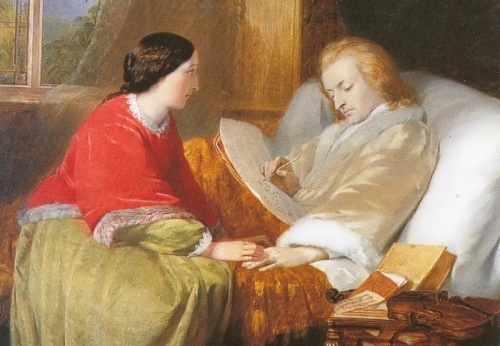 Constanze and Mozart working on Requiem on his deathbed 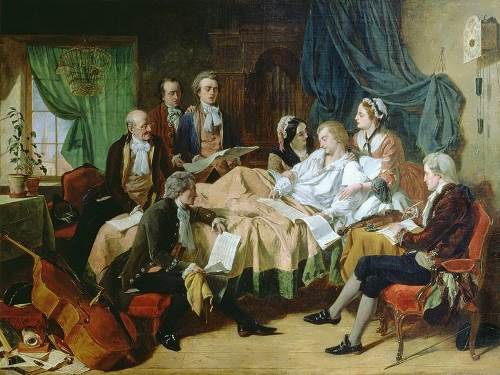 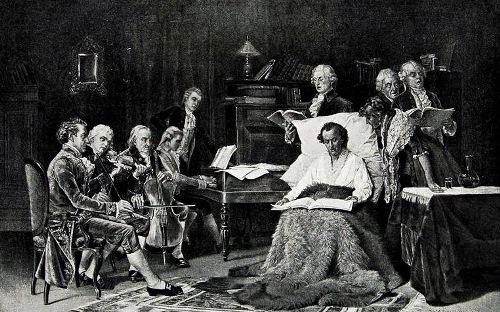 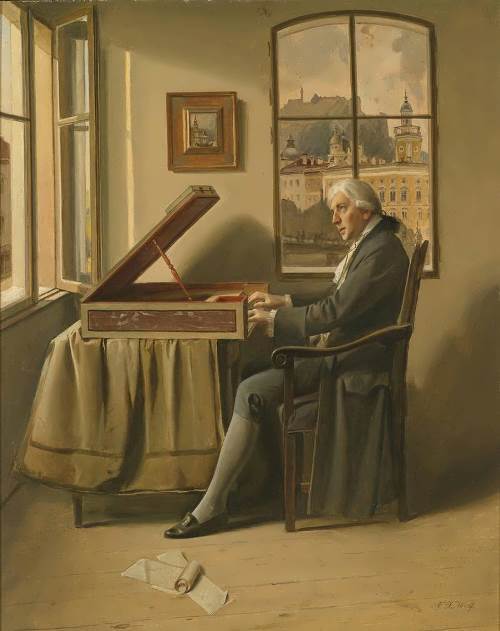 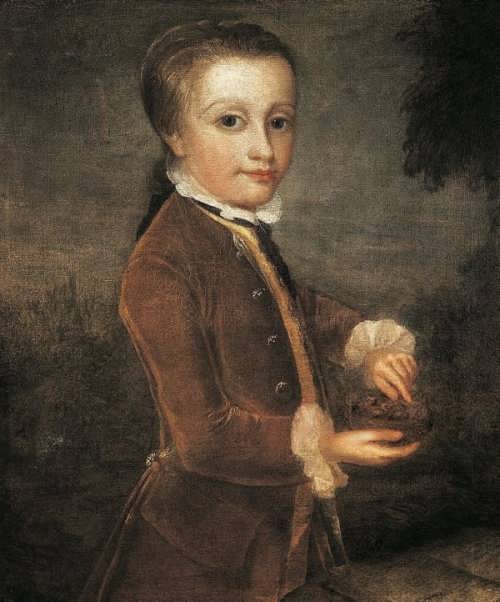 Johann Zoffany. Portrait of Mozart with a nightingale nest 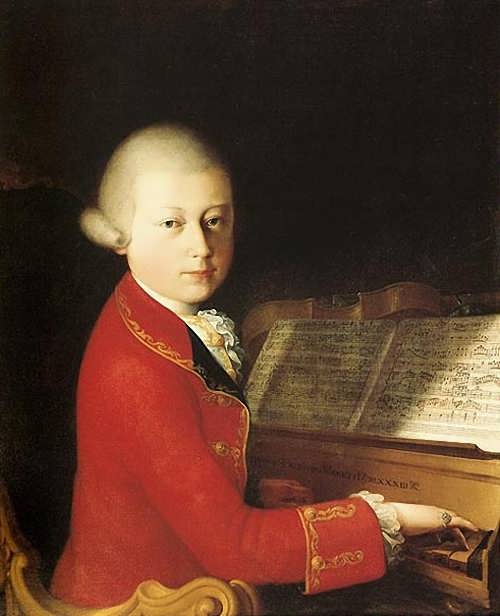 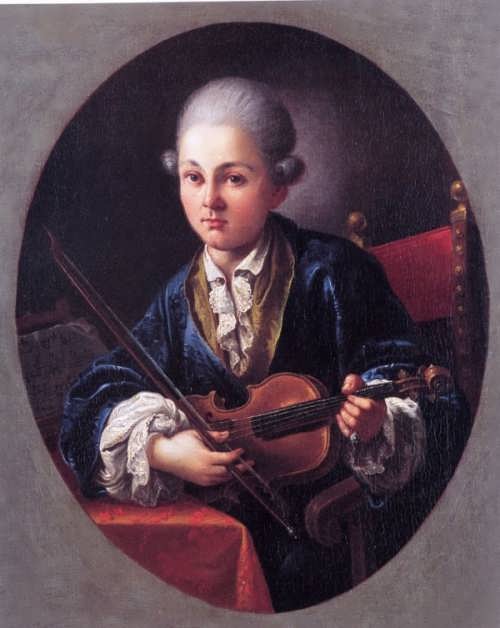 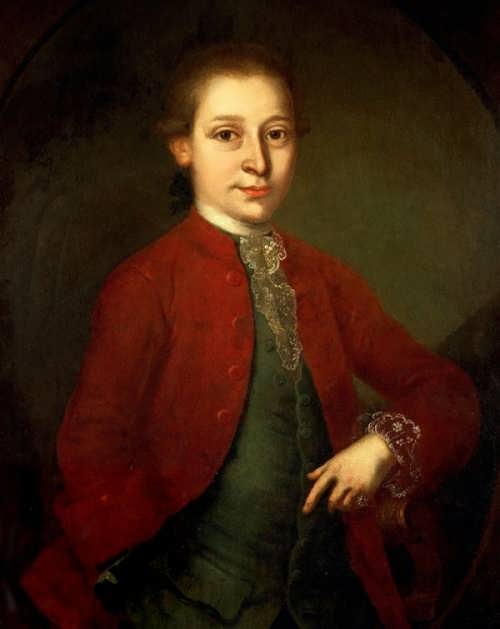 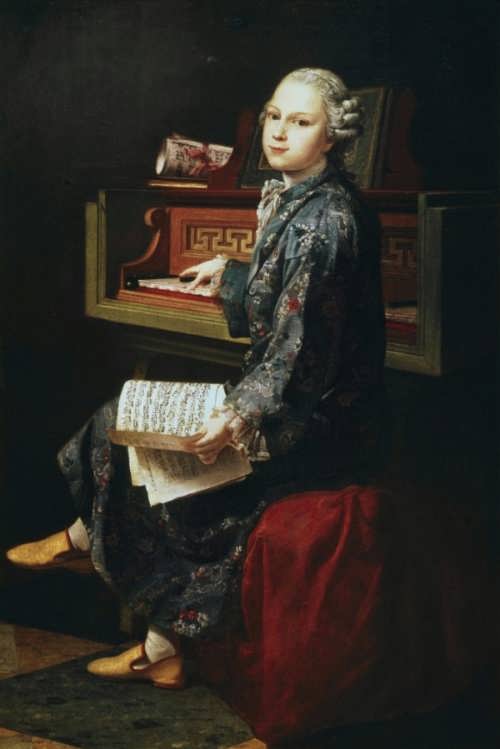 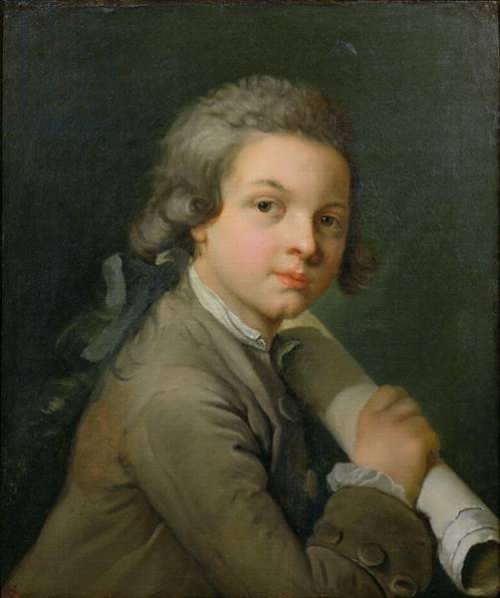 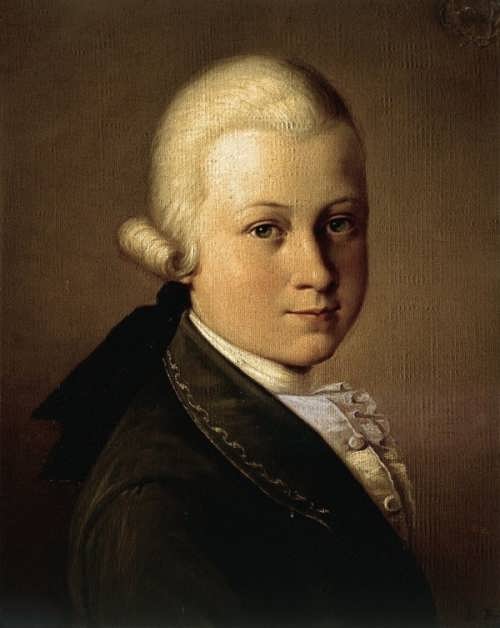 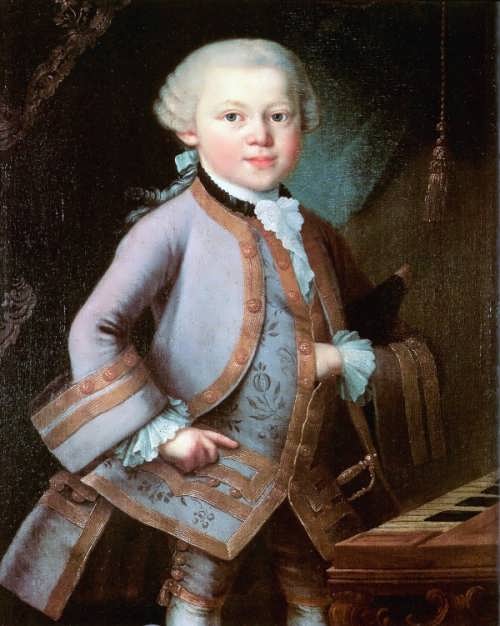 Pietro Antonio Lorenzoni. Mozart at the age of six in court dress, 1763