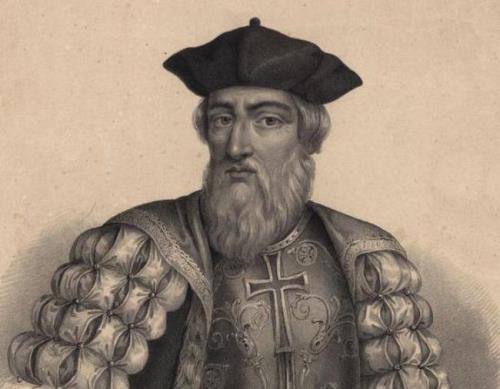 The achievement of the famous Portuguese Vasco da Gama is difficult to overestimate. The brave navigator, having rounded Africa on a ship, was the first European to reach the Indian Peninsula. But besides this, he was a cruel conqueror, who hurt thousands of innocent people …
Thanks to the discoveries of Vasco da Gama, the poor kingdom of Portugal became one of the richest on the mainland.
Vasco da Gama was born in 1469 into the family of the royal governor of Estevan da Gama and his wife Isabel in Sines. Despite his noble birth, the boy grew up with the sons of fishermen, and therefore he learned to swim and sailed a lot. In the evenings, the children gathered around the old sailors, who told them about the adventures. Often there were stories about the African coast, where black people with big lips and bloodshot eyes lived. The Portuguese considered them savages and cannibals, and the boys took for granted the ruin of their settlements. There was no need to look for justifications for this – “in benefit of the crown and of Portugal.”
Vasco became a naval officer and soon received praise from the king himself. The fact is that in 1492 the French corsairs captured the Portuguese caravel with gold from Guinea. The king ordered the young officer to revenge. Vasco and his team, under cover of night, passed along the coast at lightning speed and captured all the ships of the French. Naturally, the enemy resisted, but Da Gama simply did not give them a chance. As a result, France returned the gold in exchange for the seized vessels, and the name of Vasco da Gama was pronounced after the prefix “ferocious corsair”.

In 1495, the new king, Manuel I, took the throne of Portugal, dreaming to continue the work of Henry the Navigator. The monarch decided to find a way to India to get a monopoly on the spice trade in Europe. By royal decree 4 ships were built. The king entrusted Vasco the command of the expedition. 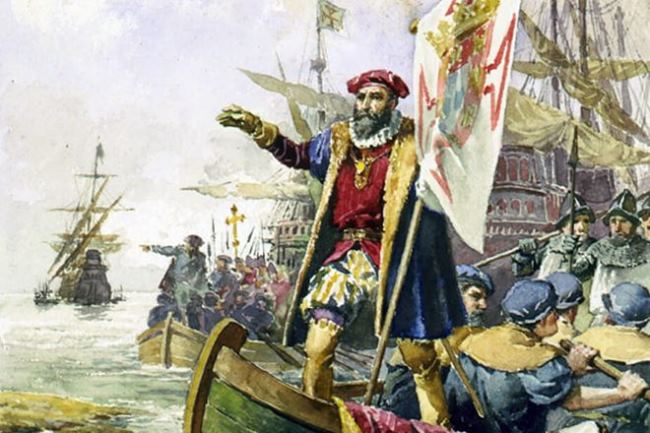 After sailing from Lisbon in May 1498, the Portuguese reached the Indian city of Calicut (the modern city of Kozhikode in Kerala). The ruler of Calicut was glad to meet the Portuguese, considering that the Arabs would finally have competitors in trade. And although the latter warned the ruler about the perfidy of Europeans, he considered that it was because of the fear of competition.
Vasco appeared before the ruler of Calicut, telling him that his ships were only part of a large fleet sent by his king to India for commercial affairs. The Hindu was delighted with the new ally and gave a chic feast in honor of the guests.
The next day, Vasco called the courtiers to show them the gifts. When they saw “12 pieces of matter, 4 red caps, 6 hats, 4 strands of coral, a box with basins, a box of sugar, two barrels of oil”, they could not hold back the smiles. “These gifts will delight a pauper, but not a king,” they said and refused to take gifts. At the same time, the Mauritanian merchants told about cruelties of the Portuguese in East Africa. And in the eyes of the ruler, da Gama quickly fell to the position of a liar and a pirate. 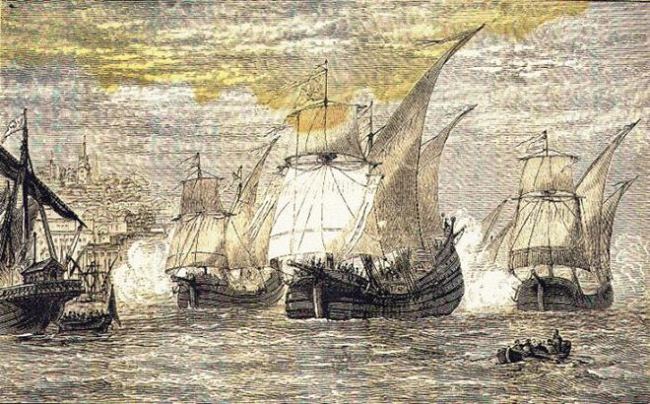 When Vasco appeared before the ruler for the second time, he expressed displeasure with the lack of gifts, but nevertheless he gave his permission to trade. However, simple Portuguese goods did not arouse interest. And da Gama wanted to go back with a cargo of spices. So he demanded to load his ship with spices in debt. The ruler, offended by the message, sent an officer with his retinue to the ship. But da Gama arrested them. Then the Indians arrested the Portuguese on the shore.
A week later, the ruler released the Portuguese and Vasco, having received his people, sailed with hostages to Kannanur – a state that was at enmity with Calicut. There, the Portuguese were given spices, and on September 19, 1499, Vasco, having lost 2 of 4 ships and 2/3 crew, returned to Lisbon. The cost of the cargo was 60 times the cost of the expedition.
On March 9, 1500, an expedition of 13 ships and 1,200 soldiers under the command of Pedro Cabral set off for India from Lisbon. He presented the ruler with expensive gifts and received permission to trade. But it was not very successful. And then the Portuguese provoked the conflict and fired Calicut with cannons. Cabral went to the opponent of the ruler – the rajah of the city of Kochi. Having loaded full holds of spices and silk, Cabral returned to Portugal. However, the Europeans could not get the maximum profit – the Arabs had similar goods. And Manuel I sent Vasco da Gama to deal with competitors. 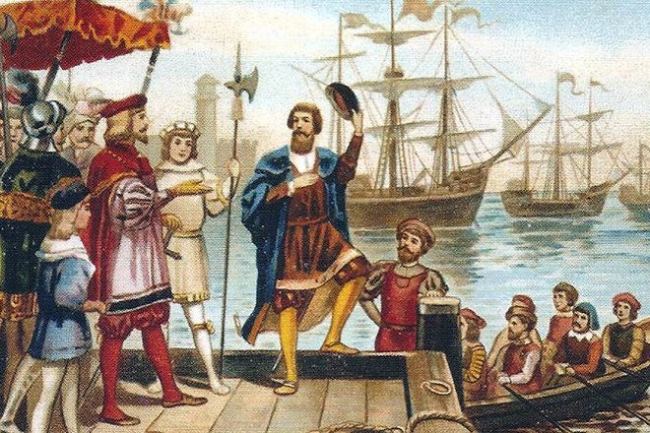 Explorer returns from a trip

By that time, Vasco had become the “Admiral of the Indian Ocean” and having received a squadron of 20 ships left Lisbon on 10 February 1502. Six ships of the squadron were going to bring spices to Europe, and the rest of them were going to sink Arab ships. It was not surprising that from the very first day of his stay in the Indian Ocean, da Gama began to attack foreign ships.
On October 3, 1502, da Gama arrived in Kannur and then he went to Calicut to deal with the ruler. Vasco gave an ultimatum: banish all Muslims from Calicut! After the refusal, the Portuguese fired the city with cannons. Unable to capture the city da Gama captured several Calicut ships at sea.
On October 11, 1503, ships with the full holds of spices triumphantly came to the Portuguese port. Vasco was awarded for his service. At the same time, the navigator had a reputation as a tough and incorruptible person. And in 1524, Juan III sent Vasco to India again, appointing him vice-king.
After arriving in India, da Gama made a series of reforms, but soon became ill with malaria and died. In 1539, his remains were transported to Portugal and buried in the church in Vidigueira. 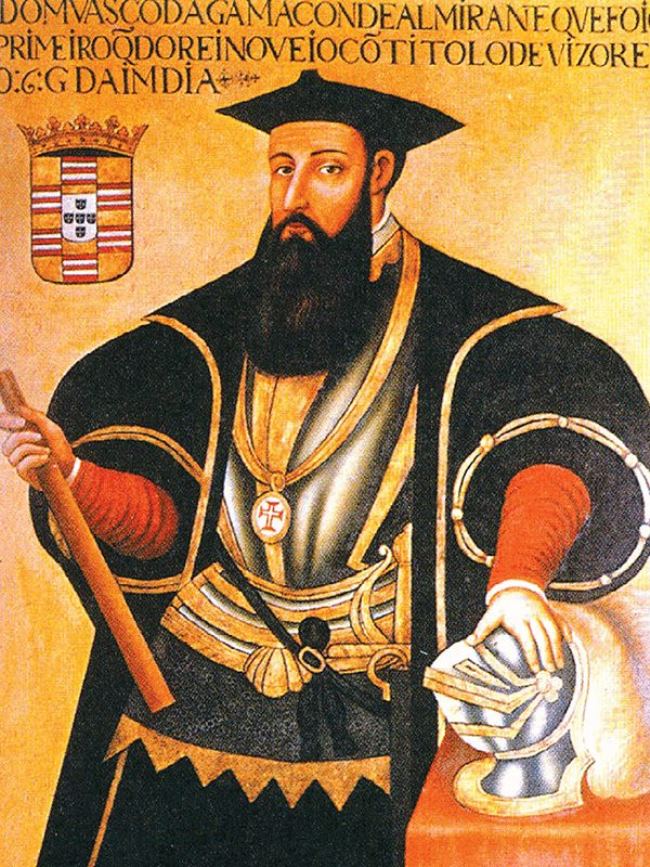 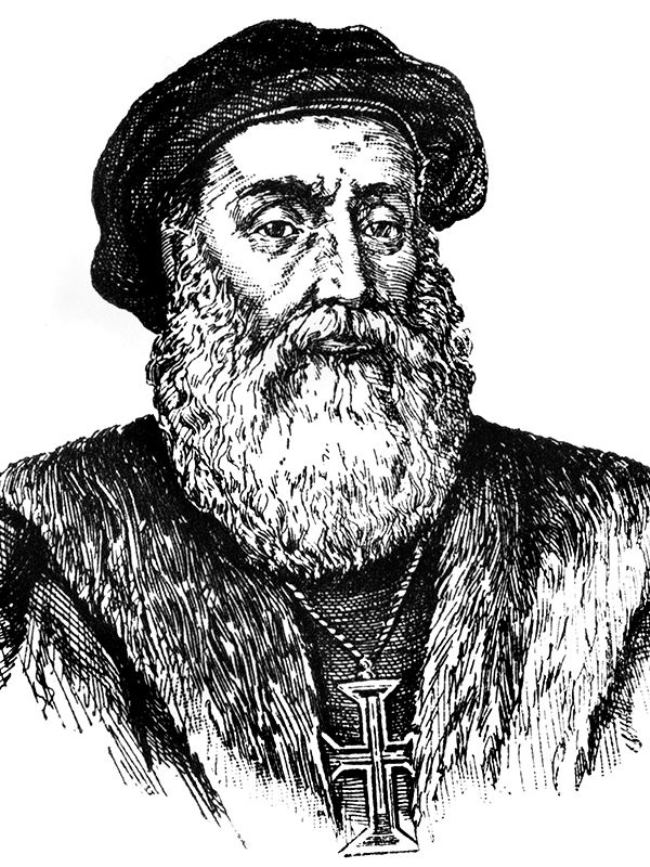 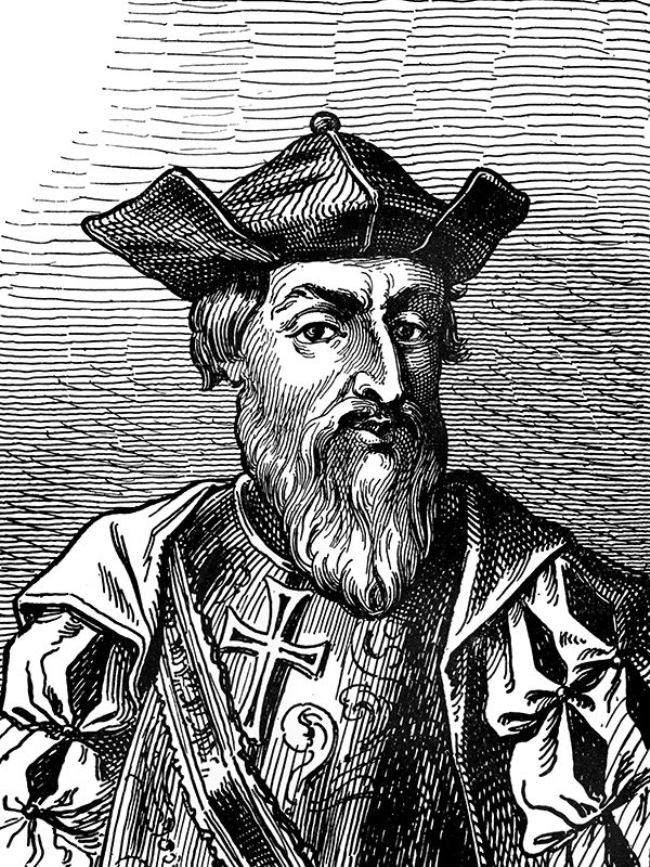 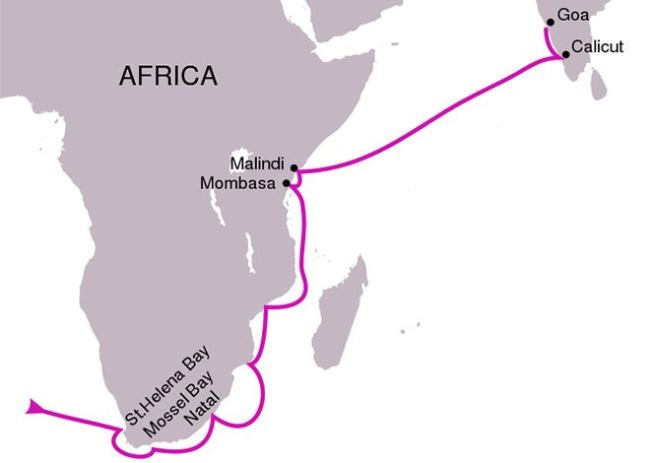 Map of the first journey of Vasco 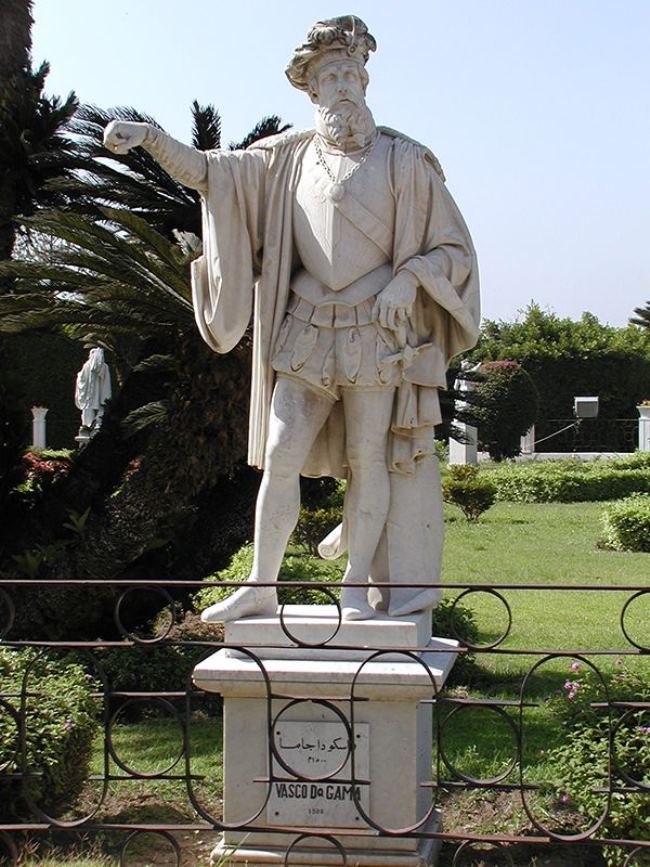 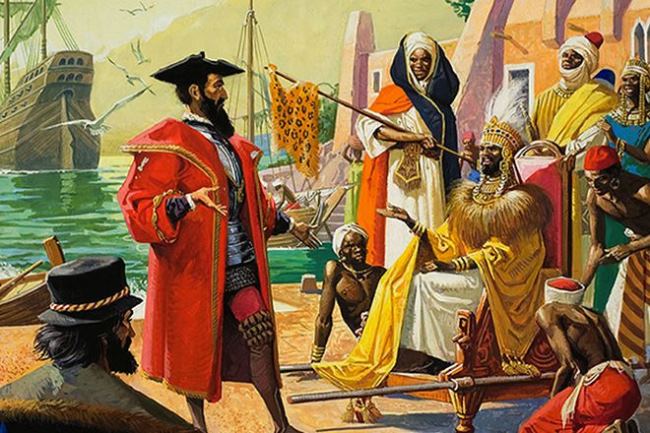 Portuguese explorer during his second journey 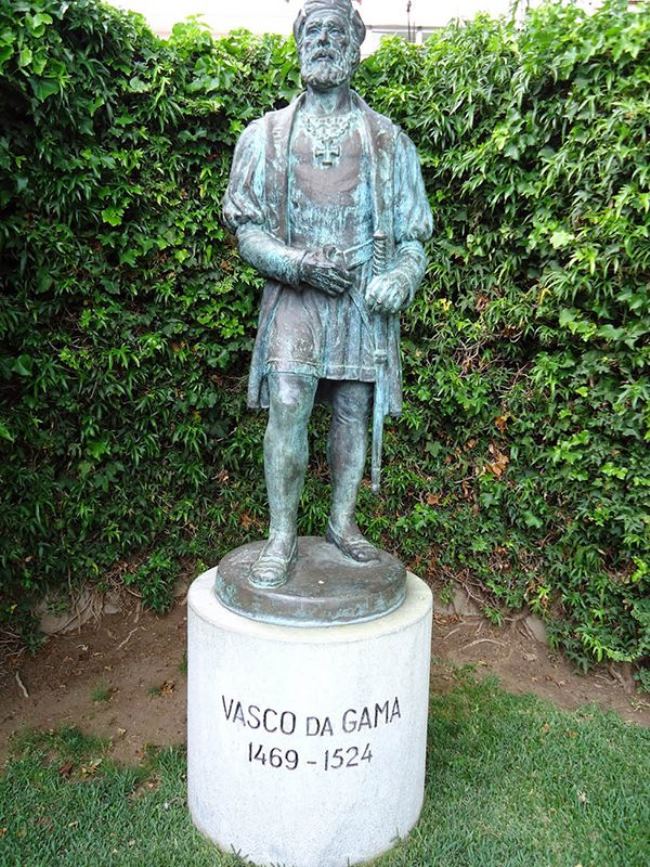 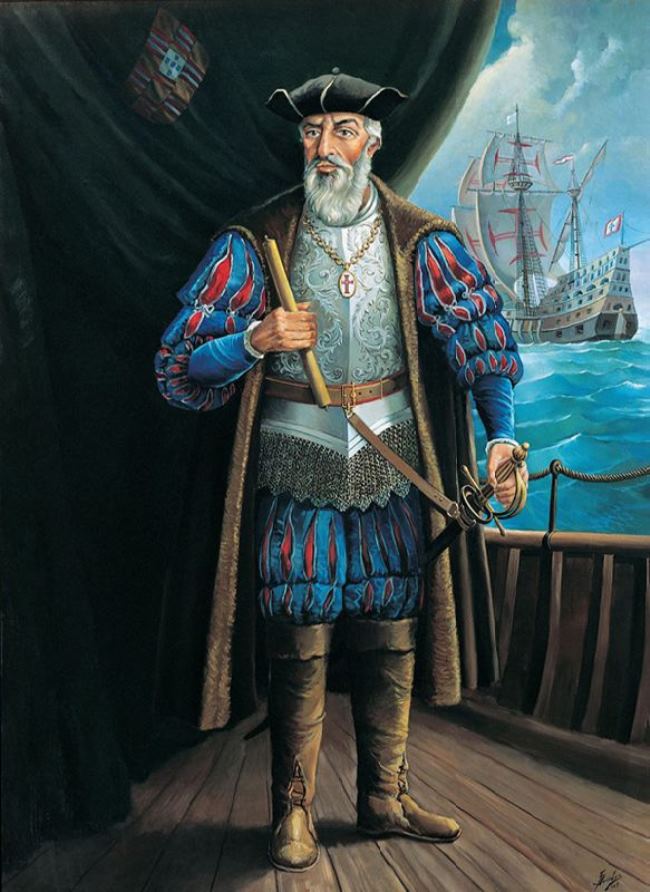 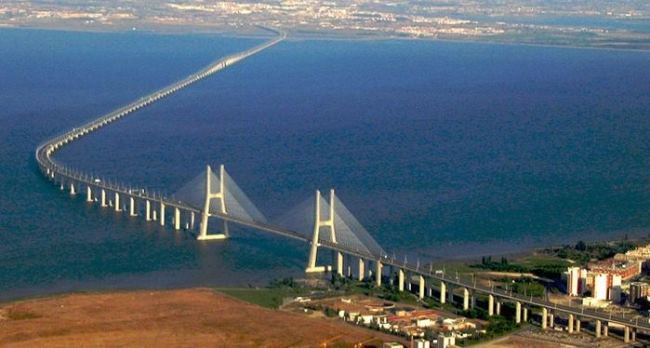 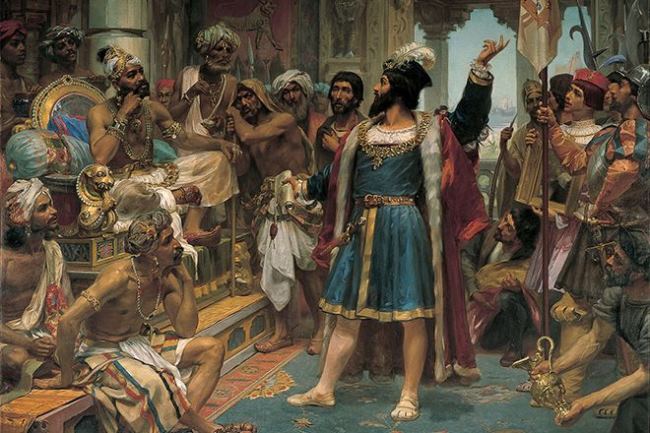 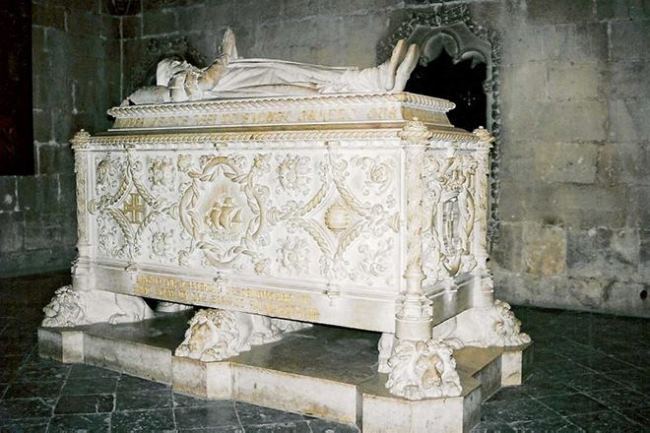 Tomb of Vasco in Jeronimos Monastery in Lisbon Cathedral 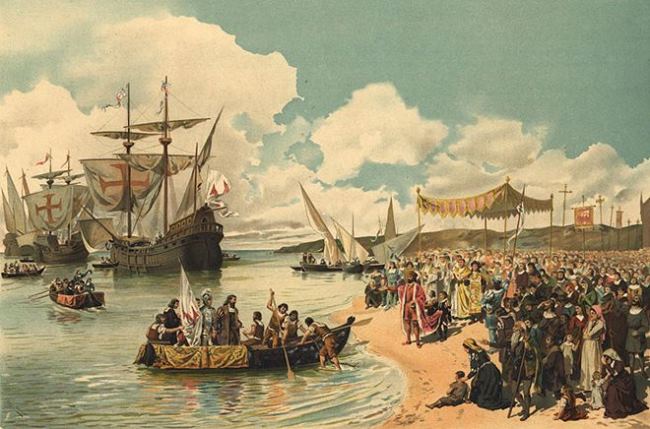 Vasco is going to India